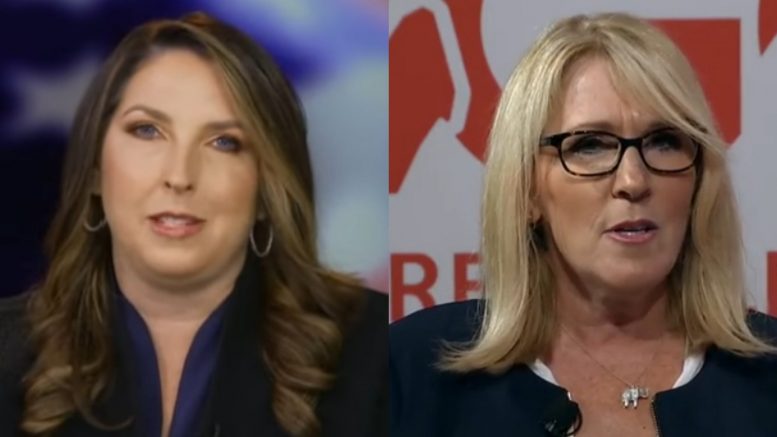 The two GOP leaders are specifically concerned with Wayne County where there are currently over 200 signed affidavits alleging mass voter fraud. McDaniel and Cox are seeking a “full and transparent” audit in that county.

In a thread posted to Twitter on Saturday, McDaniel wrote: “The irregularities we have seen in Michigan cannot simply be ignored away or brushed under the rug.They must be confronted and thoroughly examined. [Laura Cox] and I are demanding a full and transparent audit in Wayne County!”

The irregularities we have seen in Michigan cannot simply be ignored away or brushed under the rug.

They must be confronted and thoroughly examined. @MIGOPChair and I are demanding a full and transparent audit in Wayne County!

McDaniel then included a link to their letter to the Michigan Board of State Canvassers, which stated as follows:

“To the Members of the Board of State Canvassers:

“This board faces a stark choice: it can either ignore numerical anomalies and credible reports of procedural irregularities, leaving the distrust and sense of procedural disenfranchisement felt by many Michigan voters to fester for years; or it can adjourn for fourteen days to allow for a full audit and investigation into those anomalies and irregularities before certifying the results of the 2020 General Election, allowing all Michiganders to have confidence in the results. On behalf of the Republican National Committee (“RNC”) and Michigan Republican Party (“MRP”) , we encourage the Board to grant the request made by John James for Senate, Inc. (“James Campaign”) and adjourn for fourteen days to allow for a full, transparent audit of Wayne County’s 2020 General Election results.

“We echo the concerns voiced by the James Campaign and Mr. James in their request and letter of November 20, 2020. The procedural and accounting irregularities identified by the James Campaign’s request are credible, deeply concerning, and threaten to undermine Michigander’s faith in the integrity of the November 2020 General Election. To simply gloss over those irregularities now without a thorough audit would only foster feelings of distrust among Michigan’s electorate. In light of the already unprecedented nature of this election—conducted largely by mail in the midst of an ongoing pandemic, it would be a grievous dereliction of this Board’s duty to the people of Michigan not to ensure that the irregularities identified by the James Campaign are thoroughly investigated by a full audit before certifying Wayne County’s results. As the James Campaign has adeptly explained, such an audit could be completed during a fourteen day adjournment of this Board, and neither that adjournment nor the audit of Wayne County’s results would impermissibly delay certification of the election results beyond the statutory deadline of December 7, 2020.

“Election officials in other states have taken discretionary steps to ensure that their voters could have full faith in the integrity of their state’s results. In Georgia, Secretary of State Brad Raffensperger ordered a full, statewide audit by hand when confronted with reports of numerical anomalies, procedural errors, and alleged malfeasance despite not being required to do so by Georgia’s laws. Secretary Raffensperger noted that though he thought it was very unlikely that recount would overturn the state’s election results, there was no reason to hurry certification along without first ensuring that all reported procedural irregularities were fully examined. He explained, ‘With the margin being so close, it will require a full by-hand recount in each county. This will help build confidence. It will be an audit, a recount, and a recanvass all once; it will be a heavy lift, but we will work with the counties to get this done in time for our state certification.’ Secretary Raffensperger took this discretionary decision to engage in a full hand recount despite Georgia law not necessarily requiring a full audit by statewide hand recount. See O.C.G.A. § 21-2-498 and SEB Rule 183-1-15-.04. Secretary Raffensperger made this decision in recognition of the imperative that if our government is to function with any legitimacy, voters must have full confidence in the integrity of an election’s result, regardless of whether their preferred candidate won. We encourage this Board to follow that example and order a full audit of Wayne County’s election results and receipts to ensure that Michiganders receive at least the same level of procedural safeguards as Georgians.

“We are distressed by the comments of some public officials in Michigan casually dismissing the significant problems and irregularities seen in Wayne County. While those comments may be motivated by a desire to bolster confidence in the election results, its actual effect has been to make the over 2.6 million Trump and Republican voters in the state even more distrustful that Michigan’s election officials are ignoring their demands for free and fair elections. These issues cannot simply be ignored away or brushed under the rug, they must be confronted and thoroughly examined. We implore you to listen to the pleas of your voters and order the audit.”

Both GOP canvassers in Wayne County recently rescinded their votes to certify the results in the Detroit area after being falsely promised a full recount and audit by state leadership. The pair claim they were intimidated to vote in favor of the certification despite their concern of multiple irregularities, and they have since signed affidavits detailing their encounter.

Related Article: Candace Owens Indicates Why It’s Clear That ‘Democrats Have Something To Hide’ About The Election

In ending here is video of one of the canvassers describing her experience with electoral intimidation in Michigan: