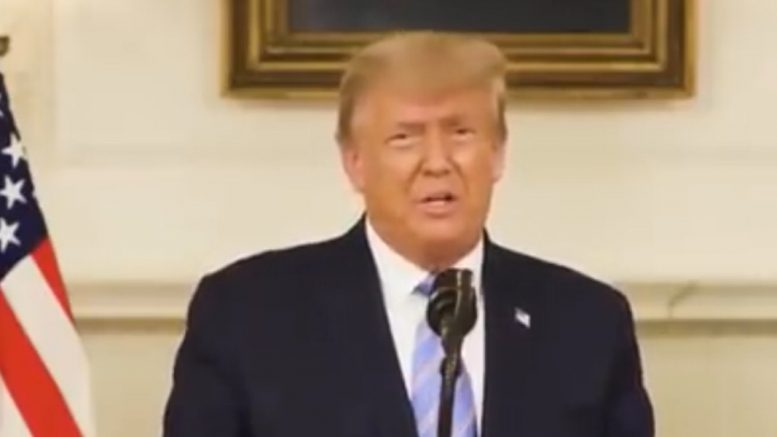 The 45th President responded to an article written by Jeremy W. Peters, from the leftwing publication The New York Times titled: In Restricting Early Voting, the Right Sees a New ‘Center of Gravity’, which claims in part “Donald Trump is no longer center stage. But many conservative activists are finding that the best way to raise money and keep voters engaged is to make his biggest fabrication their top priority.”

“For now, many conservative groups are choosing to side with the former president, even at the risk of feeding corrosive falsehoods about the prevalence of voter fraud. It is certainly the more financially secure path and, some say, the one where they will encounter the least resistance, Peters who is also an MSNBC contributor, wrote in part.

Former President Trump responded to the New York Times’ article in a statement Saturday via email, asserting the “election was rigged, and without even going into detail, of which there is much, totally game changing”.

The New York Times did a story today saying that various Republican groups, many of them outstanding, are rallying on false claims that conservative activists are finding that the best way to raise money and keep voters engaged is to make Donald J. Trump’s biggest fabrication, Election Fraud, their top priority.

Sadly, the Election was Rigged, and without even going into detail, of which there is much, totally game changing. Democrats could not get Republican Legislatures in Swing States to approve many of the voting changes which took place before the Election, which is mandated under the Constitution of the United States.

For that reason alone, we had an Illegitimate Election. The Supreme Court and other Courts were afraid to rule, they were “gutless,” and will go down in history as such. No wonder so much money is being raised on this issue, and law-abiding people have every right to do so! Continued Below 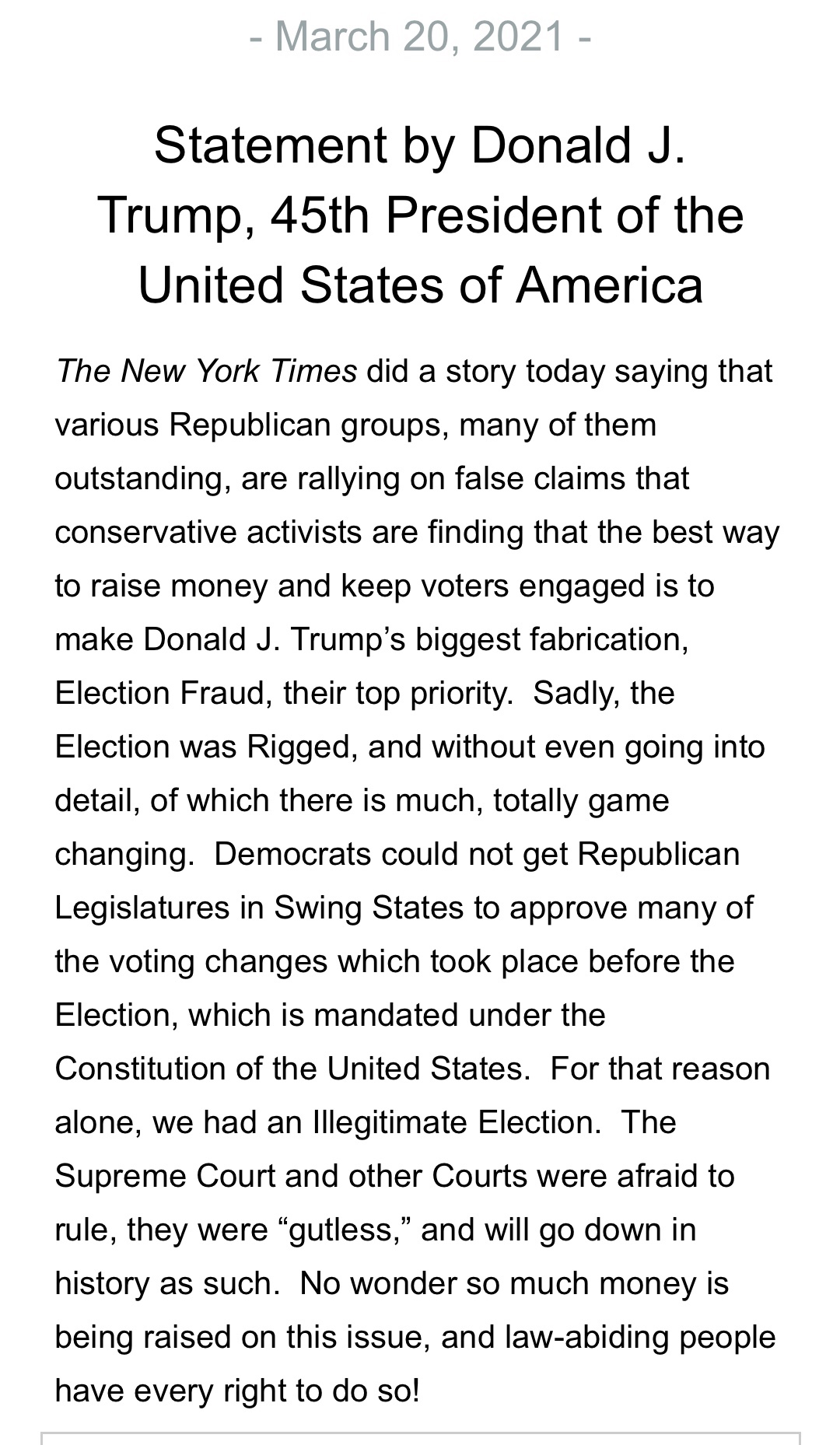 John Solomon from Just The News, wrote on Thursday, “Long after former President Donald Trump dropped his legal challenges to the 2020 election, some courts in battleground states are beginning to declare the way widespread absentee ballots were implemented or counted violated state laws.”

Solomon noted the latest ruling came this month in Michigan, where the State Court of Claims concluded that Democratic Secretary of State Jocelyn Benson’s instructions on signature verification for absentee ballots violated state law. Continued Below

Benson had argued “slight similarities” in signatures on absentee ballots should lead a counter to decide “in favor of finding that the voter’s signature was valid.” Continued Below

In neighboring Wisconsin, the state Supreme Court handed down a significant ruling in December when the justices concluded that state and local election officials erred when they gave blanket permission allowing voters to declare themselves homebound and skip voter ID requirements in the 2020 elections,

In a case challenging the practice in Dane County, one of Wisconsin’s large urban centers around the city of Madison, the state’s highest court ruled that only those voters whose “own age, physical illness or infirmity” makes them homebound could declare themselves “indefinitely confined” and avoid complying with a requirement for photo ID.

The court ruled that local officials like Dane County and Gov. Tony Evers did not have legal authority to exempt all voters to get an absentee ballot without an ID. Evers had issued an executive order earlier this year.

“We conclude that [Evers’] Emergency Order #12 did not render all Wisconsin electors ‘indefinitely confined,’ thereby obviating the requirement of a valid photo identification to obtain an absentee ballot,” the majority ruling concluded. Continued Below

The court filings indicated nearly 200,000 voters declared themselves permanently confined in the state’s spring primary, a marked rise over prior years, and even more did so in the general election. Biden won Wisconsin by just 20,000 votes.

Meanwhile in Virginia, a judge in January approved a consent decree permanently banning the acceptance of ballots without postmarks after Election Day, concluding that instructions from the Virginia Department of Elections to the contrary in 2020 had violated state law. An electoral board member in Frederick County challenged the legality of the state’s instruction and won though the ruling came after the election.

“If the return envelope has a missing postmark, the ballot shall be rendered invalid,” Frederick County Circuit Judge William W. Eldridge IV ruled in the consent decree.

Several more legal challenges remain in states, as well as two audits/investigations of voting machine logs that are pending in Georgia and Arizona. And while there has been no proof the elections were impacted by widespread fraud, there are still significant disputes over whether rule changes and absentee ballot procedures in key swing states may have been unlawful.

In addition, the Thomas More Society’s Amistad Project on election integrity is pursuing litigation over whether hundreds of millions of dollars donated by Facebook founder Mark Zuckerberg and routed to local election officials in several battleground states may have unlawfully influenced the election, according to the project’s director, Phill Kline.