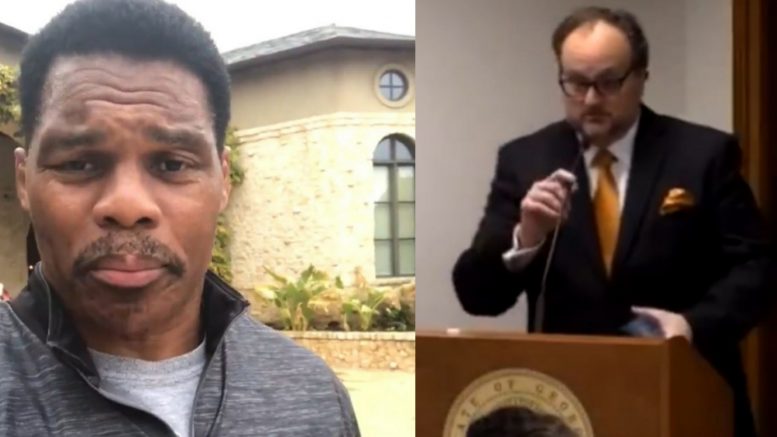 “After watching the Ga Senate Hearings, there is no doubt there is serious Election Fraud!” NFL legend Herschel Walker tweeted in response to Georgia’s Senate Judiciary Subcommittee hearing on Wednesday.

Among some of the most explosive testimonies included the moment when white hat hackers claimed to have remotely gained full access to a “poll pod” at an undisclosed polling center in Georgia, which an expert said could enable someone with bad intentions to remotely alter election results.

“At this very moment, at a polling location in the county, not only do we now have access through the devices, to the poll pad, the system, but we are in,” technology expert Jovan Pulizer alleged to the Georgia lawmakers. “And it’s not supposed to have Wi-Fi and that’s not supposed to be able to happen. So, we’ve documented now it’s communicating two ways, in real-time, meaning it’s receiving data and sending data– should never happen, shouldn’t be WIFI.”

“We’ve now documented it in real-time, so we can suck down the data, and that’s going on right there where everybody’s voting, and I just wanted to get that into the record,” Pulizer emphasized in his testimony.

Herschel Walker, who resides in Georgia, tweeted a selfie video as part of his response to Wednesday’s hearing.

“I watched the hearing today and it was very eye-opening. I was hurt because I love the state of Georgia, I love the United States of America,” Walker said in his video.

“The whole world is watching right now. How can we certify something that we know is not right?” he questioned.

“Unless you’re part of the problem, we got to do what’s right, right now and not certify this here. And find out what’s going on,” Herschel concluded. Video Below

After watching the Ga Senate Hearings, there is no doubt there is serious Election Fraud! The whole world is watching…. so Georgia, we can be leaders by doing what’s right. pic.twitter.com/XEfqQAlpio

President Donald Trump also weighed in on Wednesday’s hearing, where he called on Georgia Governor Brian Kemp to resign. See Below

We leave you with some of the President’s related tweets:

KC Chiefs DE Frank Clark On Why He Wore Trump Hoodie To Super Bowl Press Conference: “A Historical Moment In Our History”