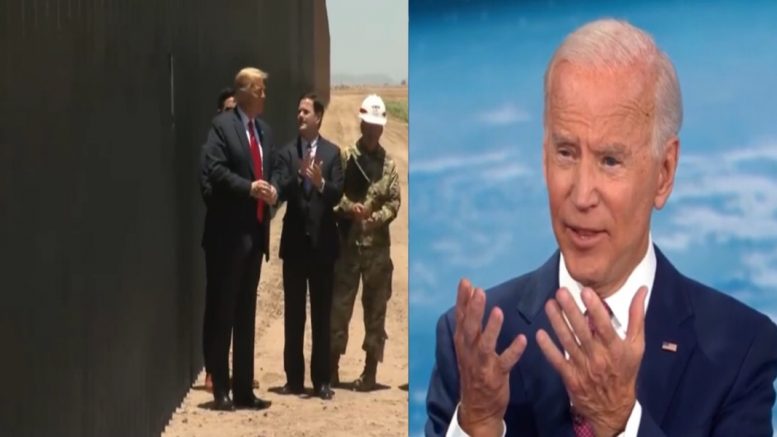 The Biden administration is reportedly considering restarting the construction of former President Donald Trump’s southern border wall as the administration is struggling to maintain control of the border crisis.

Department of Homeland Security Secretary Alejandro Mayorkas said during a conversation with ICE employees last week that the administration was considering finishing “gaps in the wall.”

As reported by Daily Wire:

“It’s not a single answer to a single question. There are different projects that the chief of the Border Patrol has presented and the acting commissioner of CBP presented to me,” Mayorkas said, according to notes of the ICE session reviewed by The Washington Times.

“The president has communicated quite clearly his decision that the emergency that triggered the devotion of DOD funds to the construction of the border wall is ended. But that leaves room to make decisions as the administration, as part of the administration, in particular areas of the wall that need renovation, particular projects that need to be finished.”

The Times said that Mayorkas specifically mentioned those “particular projects” included “gaps,” “gates,” and areas “where the wall has been completed but the technology has not been implemented.” Continued Below

The report noted that the new completed section of border wall is more than just a wall as it includes technology that allows authorities to detect incursions and features “high-speed roads” that allows for rapid response. The report also highlighted recent polling that showed that the majority of Americans, 53% overall, support construction of the border wall.

The report also comes as Biden’s border crisis has overwhelmed the U.S.-Mexico border, promoting backlash against Biden from Republicans, Democrats, and even the president of Mexico.

A new poll released this week showed that the majority of Americans do not approve of the job that Biden is doing on the border. Continued Below

Joe Biden had previously claimed, “There will not be another foot of wall constructed on my administration”.

Putting this out there before Biden takes credit for the wall pic.twitter.com/DwiJakzIjy

What an absolute clown show this administration is.

Maybe they should invite Trump down to christen the wall once it’s completed, because Biden and Harris sure as hell won’t go there. https://t.co/2BxuTrsgh7

Related: Wallace To Psaki: ‘At This Point…You Are Being Less Transparent Than The Trump Administration’)