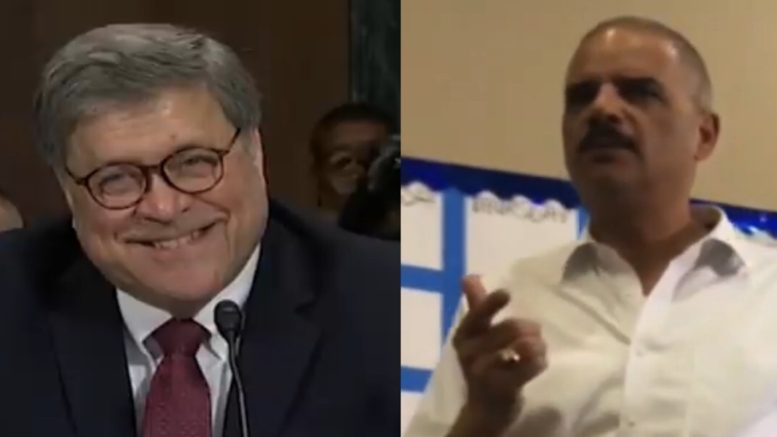 Former Attorney General Eric Holder wrote an op-ed in The Washington Post Wednesday where he accused the current Attorney General, William Barr, of being “nakedly partisan” and “unfit to be attorney general.”

Holder’s op-ed comes after he claimed the Justice Department’s inspector general report showed “conclusively that there was a need for Russia inquiry” and accused Barr of being “politically motivated.” The DOJ watchdog, however, found the FBI committed 17 “significant inaccuracies and omissions” in its application to surveil former Trump campaign adviser Carter Page as part of its investigation into the 2016 Trump campaign.

Eric Holder took to Twitter after the release of the FISA report to claim: “IG Report shows conclusively that there was a need for Russia inquiry. All those-including the AG-who questioned the motives of the career people at DOJ and FBI must acknowledge this. Do no more harm to these organizations. You were politically motivated; you’re now proven wrong.”

He added, “To the men and women of DOJ/FBI: stay strong, keep the faith, be true to the oath you have sworn, be secure in the knowledge that you have the support of the American people. The era of Trump and Barr will pass-their slander, insults and lies will end. We respect & believe in you”.

In his op-ed, Holder wrote in the Washington Post: “I respect the office ad understand just how tough the job can be. But recently, Attorney General William P. Barr has made a series of public statements and taken actions that are so plainly ideological, that they demand a response from someone who held the same office.”

Holder then lashed out at Attorney General William Barr’s recent Federalist Society speech in which Barr pushed back against the rising anti-police sentiment among “the left,” claiming it was “antithetical to the most basic tenets fo equality and justice.” (Continued Below)

“It undermines the need for understanding between law enforcement and certain communities and flies in the face of everything the Justice Department stands for,” Holder wrote. “I and many other Justice veterans were hopeful that he would serve as a responsible steward of the department and a protector of the rule of law,”

“Virtually since the moment he took office, though, Barr’s words and actions have been fundamentally inconsistent with his duty to the Constitution. Which is why I now fear that his conduct — running political interference for an increasingly lawless president– will wreak lasting damage,” Holder claimed. “William Barr has proved he is incapable of serving as such an attorney general. He is unfit to lead the Justice Department.”

Coming from the corrupt Eric Holder, the master mind of Operation Fast& Furious that let guns into the hands of Mexican drug lords used to kill Border Agent Brian Terry. Holder should keep his pie-hole shut.https://t.co/asSSS0x5Lf

The host of The Buck Sexton Show; former CIA Analyst and NYPD Intel Division, Buck Sexton, wrote: “Maybe Eric Holder can teach Barr the ethics of how to push through the pardon of an absconded felon as a pay off to his rich wife who writes checks to Democrat politicians Or how to cover up a program where Feds forced gun sellers to put weapons in hands of Mexican drug cartels”.

Obama “wing man” Eric Holder, who was held in contempt by Republicans and Democrats, whose DOJ gave thousands of guns to narco terrorists who killed hundreds, has serious thoughts about Bill Barr. https://t.co/RkGlPTRnHT

Matt Schlapp tweeted in response to Katie Pavlich: “And Eric Holder encouraged the left to kick Trump supporters when they see them. A real role model”.

And Eric Holder encouraged the left to kick Trump supporters when they see them. A real role model https://t.co/hNNfxDggxV

We leave you with Pamela Karlan, who was Democrats’ anti-Trump witness during a House Judiciary Committee hearing, who hangs out with Eric Holder.

She also donated $1,000 to Elizabeth Warren in July and hangs out with Eric Holder. Definitely unbiased, though! pic.twitter.com/VuTqO2ZgAA