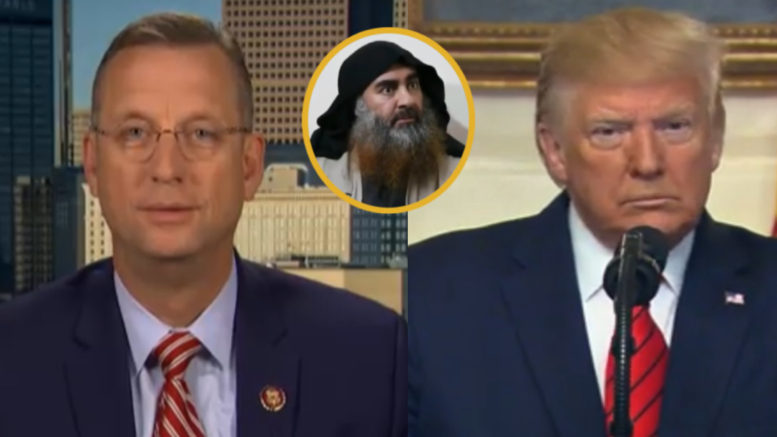 The ISIS leader’s death came in a successful U.S. military operation in northwest Syria Saturday night that took roughly two hours. The Islamic State leader detonated an explosive vest as U.S. Special Operations Forces stormed his compound in the Idlib Province. Trump said he died whimpering at the back of a dead-end tunnel, as reported by Fox News.

“First and foremost, it’s a great day for our special forces, those folks who dedicate themselves to doing exactly what they are trained to do, … root out evil, find it and kill it. I think it’s also a great day for the world when you see the whimpering coward of a terrorist Abu Baghdadi, who went into a cave and blew himself up,” Rep. Collins said.

“This is a man who threatened the world, who led a group who would rape, pillage and plunder, and yet he wanted to go in a cave and whimper and cower? All around the world, anybody who looks to ISIS right now, ought to look to their leader who whimpered and cowered in a corner and blew himself up,” Collins explained.

The Georgia Congressman then said he has a better story: “[Adam Schiff] can’t get information from his own intel committee about Syria. It goes to show you that this President, who has been attacked and who has been harassed, by an impeachment probe for the last 10 months, while all of this is going on, while the House is shut down, my committee, Judiciary can’t work, intelligence committee can’t work– Speaker Pelosi is completely helpless in trying to lead the House.” (Continued Below)

“This President took not only that and [has] been working with that, but kept his eye on the ball, kept his eye on the ball of killing ISIS leader and [a] terrorist. He shows you can do two things at one time. Obviously, our House can’t do this. Speaker Pelosi and the Democrats are incapable of doing that. The President has shown how true leadership looks,” Rep. Collins declared.

The Judiciary ranking member said of Pelosi, Schiff, and Schumer: “They are focused on one thing: that’s an election next November. This should be something celebrated by all parties, Democrats, Republicans, especially Americans, and around the world.”

(Related: Schiff Says Trump Didn’t Tell Him Or Pelosi About Baghdadi Secret Mission: ‘The Reason To Notify Gang Of Eight Is When Things Go Wrong’)