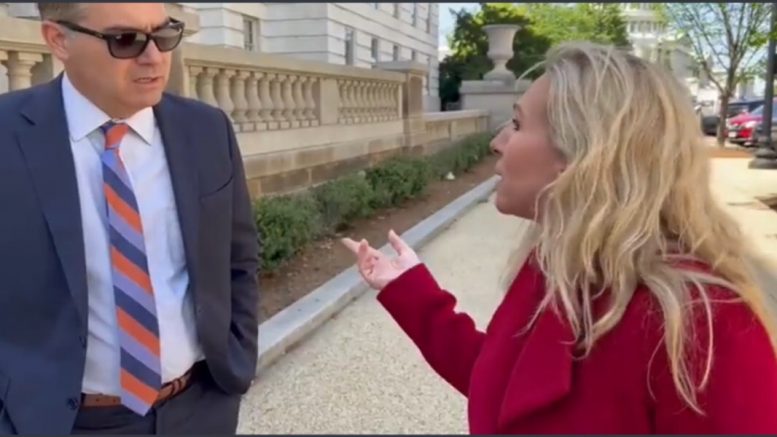 Rep. Marjorie Taylor Greene (R-GA) accused CNN’s Jim Acosta on Thursday for trying “to present” an “image” of her to his viewers on the leftwing cable network, which she said “is really not correct”, then proceeded to call him a “professional liar” and suggested he earns a paycheck to tell lies on television.

Acosta told Greene he was “just trying to get some answers” and wondered if she “sent a text asking [President Trump] to declare martial law” before he left office.

Rep. Greene said that she did not “recall those being my text messages”, but asked him if he “read the text message that he is referring to?”

“Because it actually says … if you read it correctly, Jim, — your problem is, you’re lying again right now. It says, ‘I do not know on those things’. That’s what the text message actually says. … Why don’t you be honest? You know what your problem is, you’re just another one of those liars on television, and people hate it. They can’t stand the liars on television,” Greene told Acosta.

She then told the CNN host to “quote the supposed text message” between her and 45th President Donald Trump. “Read it out loud,” she urged. “Why don’t you be honest for once? … Do something real. … Read the exact text message that you’re talking about.”

Acosta read: “In our private chat with only members, several are saying the only way to save our Republic is for Trump to call for martial law. … I don’t know on those things”. Continued Below

“This text message that supposedly is mine — I don’t know if it is. What does it say? It says ‘some members’. … It says, ‘I don’t know on those things’. Why don’t you tell that story? … You’re lying. You’re a liar. Do you know why people don’t like you? [Be]cause you’re a liar. Why do you want to lie on television for your viewers?” she asked Acosta.

“You’re trying to accuse me of something and then, when you read the actual words, it tells another story. It tells the truth. … When you actually want to be honest and talk about me as a real person and present me fairly, then I’ll talk to you. But until then, I don’t want to have anything to do with you,” she told him. Continued Below

Acosta persisted and tried to ask more questions, but Rep. Greene repeated told him to “Stop harassing me”.

“I didn’t give you permission to [ask me questions], leave me alone. … You’re trying to lie about me, and I’m tired of it. … [You’re] a liar. A professional liar. … That’s what you are on your show. Way to earn a paycheck,” the Georgia lawmaker told Acosta to his face.

I am repulsed that people gladly take a paycheck to lie and mischaracterize me like this guy, Jim @Acosta.

I want to think good things about the press, but they behave like this and it makes me sick to my stomach. pic.twitter.com/jSOUPK9RM4

Greene was also confronted by a reporter over the January 6 committee, telling him that nobody cares about the committee.

The J6 committee, which ignores the non-stop Antifa/BLM riots that caused over $2 billion in damage in American cities, only cares about one riot because of politics.

The Americans people are fed up with elected politicians that only care about themselves. pic.twitter.com/qM87HjVVa0