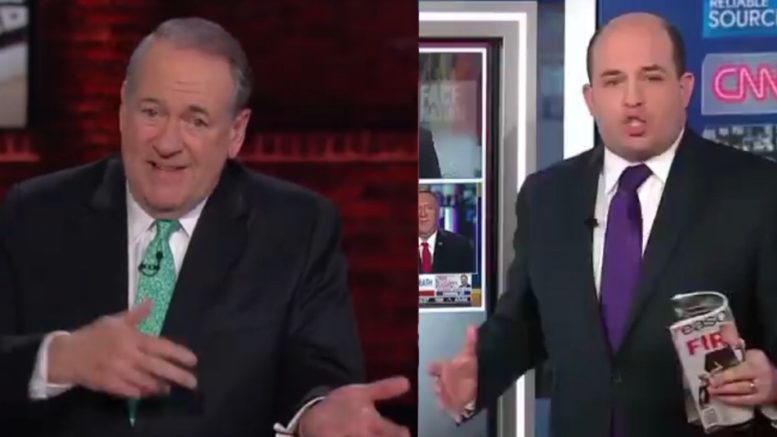 CNN’s Brian Stelter, on Sunday, warned his audience “don’t be fooled by propagandists” when listening to news coverage. This comes after President Trump ordered the attack that killed the Iranian military mastermind, Gen. Qassem Soleimani, the head of the Islamic Revolutionary Guard Corps’ elite Quds Force, in an airstrike at Baghdad International Airport Thursday night.

Upon seeing a video clip of Stelter’s remarks, former Arkansas governor Mike Huckabee took to Twitter to fire back at the CNN host, urging deplorables “not be fooled by fake news.”

Brian Stelter pointed to Secretary of State Mike Pompeo, who appeared on 6 televisions shows on Sunday to defend the American airstrike in Baghdad that killed Iranian Soleimani, while backing up President Trump’s threat that more action would come if Iran retaliates against the U.S.

“Now Americans and many others around the world are instinctively suspicious of what Iranian leaders say. But what about American leaders?” Stelter asked. “President Trump squandered his legitimacy at the beginning of his presidency and many officials in his administration have followed him down a path of deceit. So, if your skepticism was at a 7 before, it should be at 9 now. Because simply put, governments lie at wartime.”

“And lying seems to be this current government’s specialty,” Stelter claimed. “… When credibility is needed most, Trump doesn’t have it.”

While appearing to tout the Democratic talking point of that in which “Congress wasn’t informed ahead of the time about the airstrike”, Stelter said that “Journalists need to avoid being cynical but have to question everything. … Journalist values demand skepticism and patriotism demands it.” (Continued Below)

“But now is the time, right now, to insist on evidence and accountability. Now I’m not saying people should be reflexly for or against anything,” Stelter said, just moments after suggesting to his audience that their skepticism “should be on a scale of 9” with the Trump administration.

“People should be critical and think critically about everything. Especially when the current administration and the current people in power have been proven time and time again to lie and mislead you,” he added. (Video Below)

Mike Huckabee fired back at Brian Stelter upon hearing his remarks and suggested that the CNN host is a left-wing propagandist, who needs to be held accountable.

“Don’t be fooled by fake news. It’s patriotic to question biased press who gives 91% negative coverage of @realDonaldTrump. We need to hold left-wing propagandists accountable for the hate of us ‘deplorables,'” Huckabee recommended. “Their ‘news’ is delivered straight from the bull’s behind to the TV.”

Don't be fooled by the propagandists who want us to wear blinders. It is patriotic to ask for evidence. To question official accounts. To wonder if the public is being manipulated into a wider war. It is patriotic to hold our leaders accountable. pic.twitter.com/ntA1una7lq

Don’t be fooled by fake news. It’s patriotic to question biased press who gives 91% negative coverage of @realDonaldTrump We need to hold left-wing propagandists accountable for the hate of us “deplorables.” Their “news” is delivered straight from the bull’s behind to the TV. https://t.co/h58RSoMJKV