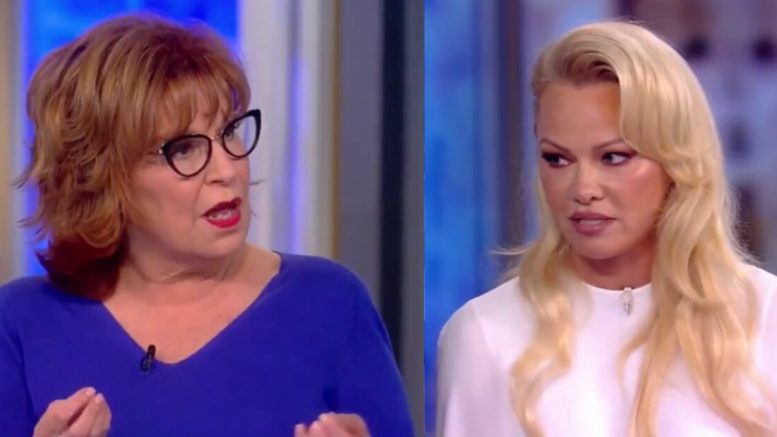 Actress, model, and activist Pamela Anderson faced off against the co-hosts of “The View” on Friday defending WikiLeaks founder Julian Assange, who is awaiting an extradition hearing in a London prison after being sentenced to 50 weeks in prison for violating his bail and going into hiding at the Ecuadorian embassy, seven years ago.

Anderson has been a fierce advocate for Assange, however, she irritated Joy Behar along with her co-hosts on Friday’s airing.

During the segment, the former Bay Watch actress irked Joy Behar when she gave a response about Hillary Clinton and President Trump.

Anderson told Behar essentially that Julian Assange doesn’t support Trump, but he doesn’t placate to one side and will release anything he has, on anybody.

Behar asked if Anderson felt Assange was “responsible for giving us Trump,” as he exposed emails sent from Hillary Clinton’s private server and leaked others from her campaign chairman during the election.

“Assange interfered in the 2016 election by conspiring with Russia by releasing hacked emails, of which hurt Hillary Clinton. It’s almost like, is he responsible for giving us, Trump?” Behar asked. (Continued Below)

“Hillary Clinton is responsible for Trump,” Anderson replied. “He wasn’t helping Trump, he was trying to tell the American people true information that Hillary was doing to make an educated choice, and I think FBI put the nail on that coffin.”

“You mean to tell me he had nothing on Trump? Come on! And that didn’t get released?” Behar wondered.

“I don’t know. If he had something on Trump, he would’ve put it out there,” she explained and added of Clinton’s emails, “They were her emails, she wrote them.” (Video Below)

Related: Trump & WikiLeaks React After DNC’s Lawsuit Against Them Gets Dismissed, Cites 1A Protection

Kamala Harris Calls On Trump To Be Kicked Off Twitter, Rob Schneider Fires Back: ‘Grossly Un-American’