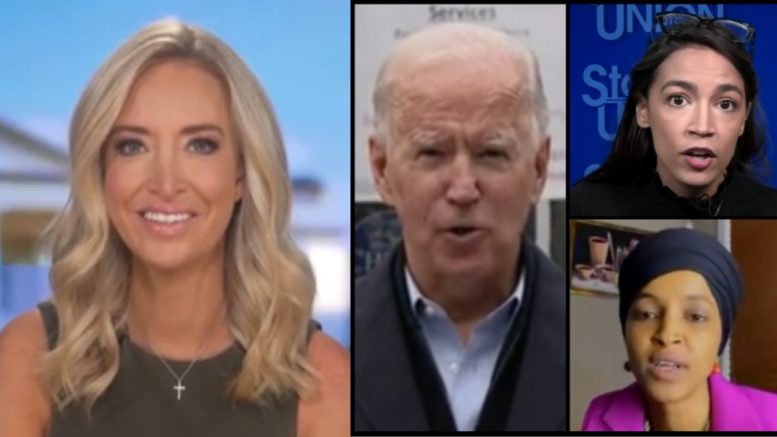 Kayleigh McEnany told host Sandra Smith Tuesday, “Joe Biden has become an empty vessel for the radical left as he’s withered away. And you heard from his puppeteers last night; AOC and Ilhan Omar, the people who are pulling the strings, calling the shots. He will pack the court, it’s why he can’t share his stance with us because it would make headlines. Yes, it would make headlines.”

“When FDR tried to do this, they said– the senators at the time said, ‘It would destroy the American Republic.’ They said, ‘This has never been tried in the history of our country’. But leave it to Joe Biden to try it today. You heard from AOC, you heard from Ilhan Omar as reporters were screaming questions at him about packing the court. His handlers pushed the press away, [be]cause he cannot answer that question, [be]cause 60% of voters are against that, according to the New York Times poll,” McEnany added.

McEnany was referring to Biden appearing to struggle while answering a question Monday, then his campaign staff is heard ordering reporters away. Continued Below

Most recently, Biden appeared to be open to the idea of “packing” the Supreme Court depending on how Republicans handled the confirmation process of Judge Amy Coney Barrett.

The Democratic presidential nominee gave the indication during a town hall event this month after weeks of repeatedly dodging any question related the highly controversial tactic of expanding the high court if Democrats don’t get their way.

“I’m open to considering what happens from that point on,” Biden told ABC’s George Stephanopoulos, leaving the door open for the possibility of trying packing the court if he wins the election. Video Below

Kayleigh McEnany sounds off on Democratic “squad” members AOC and Ilhan Omar. Her remarks begin at 2:56 into the video:

WATCH: As Biden struggles to answer a question, his campaign staff orders reporters away pic.twitter.com/yfZECVAzs5

President Trump responded on Twitter Tuesday, calling it “A disaster”:

By expanding the court we fix this broken system and have the court better represent the values of the American people.