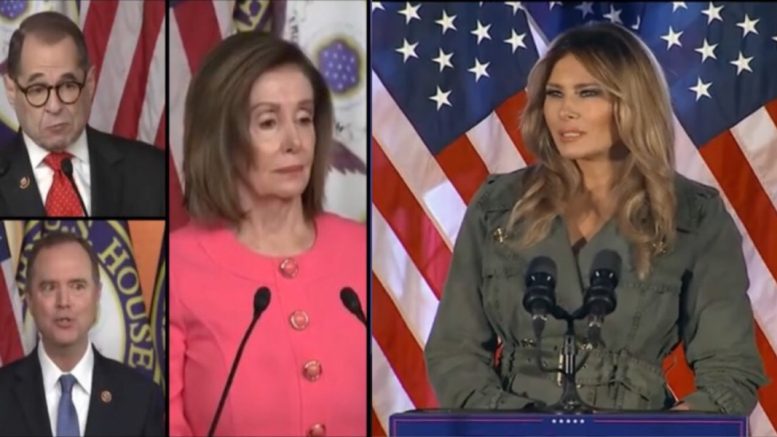 First lady Melania Trump campaigned on behalf of her husband, President Donald Trump, in Pennsylvania on Tuesday, her first solo trip of the 2020 campaign. She ripped Joe Biden, Democrats, and the media during her speech while emphasizing the president’s reelection message in the Keystone State.

The first lady defended the Commander in Chief’s record over the novel coronavirus and pointed out that Democrats “put their own agendas ahead of the American people’s well-being” and focused on a “sham impeachment” instead of the global pandemic.

“The Democrats have chosen to to put their own agendas ahead of the American people’s well-being. Instead, they attempt to create a divide,” First Lady Melania Trump said. “A divide on something that should be nonpartisan and noncontroversial, a divide that causes confusion here instead of hope and security. That is not leadership.”

“Let us also not forget what the Democrats chose to focus on when COVID-19 first came into our country. While the president was taking decisive action to keep the American people safe, the Democrats were wasting American tax payer dollars in a sham impeachment,” she reminded the audience, which prompted applause. “They care more about removing our elected president”.

The First Lady said that she “watched Donald continue to work hard, informed, and calm to protect our economy, and make hard and unpopular decisions in all he could do to keep us all safe”.

“This sham was led by opposition, and their display of hatred is on display to this day,” she noted. Continued Below

Melania Trump further said that, “Children watching and learning about politics in our country deserve a better display of political responsibility and respect for our sacred institutions.”

“Now, he suggests that he could have done a better job,” the first lady said of Biden. “Well, the American people can look at Joe Biden’s 36 years in congress and 8 years in the vice presidency and determine whether they think he will finally be able to get something done for the American people.” Video Below

Joe Biden’s “policies and socialist agenda will only serve to destroy America and all that has been built in the past four years,” Mrs. Trump said. “We must keep Donald in the White House so he can finish what he’s started and our country can continue to flourish.”

.@FLOTUS Melania Trump: "Before my husband decided to run for President, the media loved him because they saw the man that I see everyday: someone tough, successful, and fair."

Person in crowd: "And handsome!"

Kari Lake Turns the Tables on Reporter When Asked ‘Do You Think Joe Biden Is the Current President?’