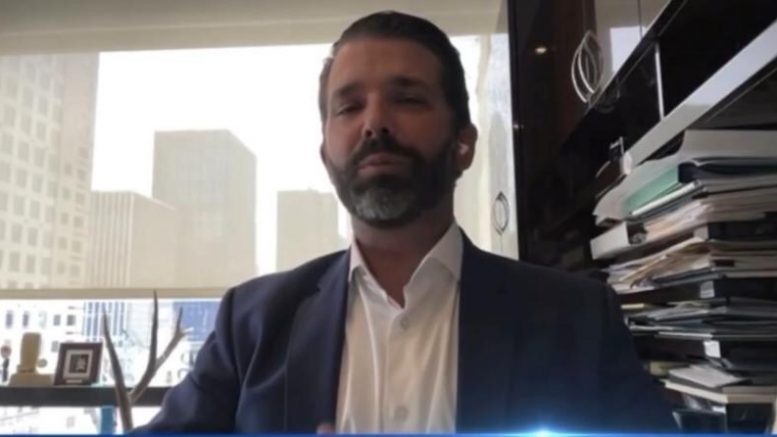 Donald Trump Jr., during a Wednesday interview on “Flash Point”, weighed in on election integrity, specifically as more states are leaning toward conducting their own forensic audits, similar to Maricopa County’s current audit.

“If we all sort of ban together, they can’t cancel us. You get worried about being isolated. You know, I’ve been canceled so many times, it’s actually sort of refreshing now at this point,” Donald Trump Jr. joked. “Once you get over that sort of initial notion, and we ban together and push back accordingly, we can get through some of the nonsense that the left is pushing.”

“It’s awesome to see these state legislatures doing this,” he said of battleground states potentially about to start forensic audits. “You gotta look into it.”

“There’s a lot of things we discussed in the last segment: Donald Trump was criticized, and I can’t believe he’s spreading this information,” he said, appearing to mock the media and Washington D.C. establishment politicians. “Guess what? It turned out he was right”.

“So I’m really curious to see what else he will be proven right about, because they would never give him the win last time. We saw that,” Don Jr. added. Video Below

“It’ll be really interesting to see what else Donald Trump will have been right about in the next few months.” pic.twitter.com/cdPo5ekHnW

In the last week alone, we’ve learned that the media, so-called fact checkers and their Big Tech enforcers lied to us about the lab-leak theory, Hydroxychloroquine and the clearing of Lafayette Square.

All to hurt Donald Trump.

What else are they lying about?

Donald Trump Jr.’s full interview begins at the 32:12 mark into the video:

(Related: Don Jr. Declares He Was ‘Wrong’ About Biden: ‘I Thought It Would Take Him Years To Destroy America’ – He’s Done It ‘In A Few Short Months’)