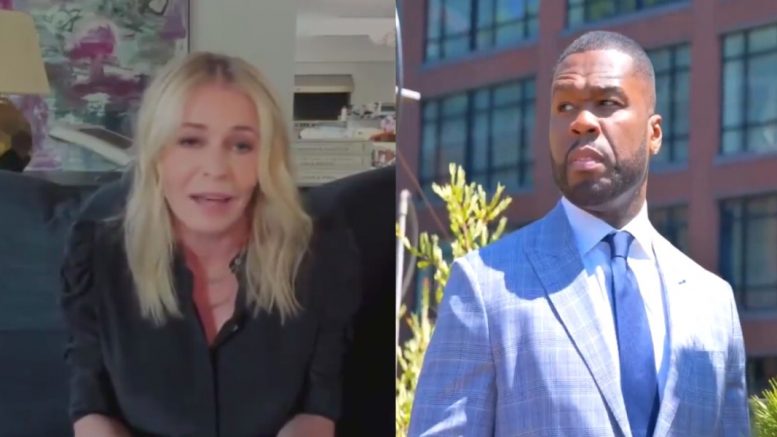 During a Friday night appearance on “The Tonight Show”, Chelsea Handler told host Jimmy Fallon why she publicly shamed and scolded her ex-boyfriend 50 Cent for supporting President Trump.

The comedian had been feuding with 50 Cent — born Curtis James Jackson III — since Monday when he shared an image from a news broadcast on Instagram that depicted the rates at which certain places would be taxed under Joe Biden’s plan. The broadcast highlighted New York state (58%) and New York City (62%), reported Fox News.

“WHAT THE F–K! (VOTE ForTRUMP) IM OUT,” 50 cent wrote in the caption. “F–K NEW YORK The KNICKS never win anyway. I don’t care Trump doesn’t like black people 62% are you out of ya f–king mind.”

During her interview, Chelsea Handler told Jimmy Fallon the 62 percent tax hike “isn’t a plan” under Joe Biden, calling it a “lie”.

“So he doesn’t want to pay 62 percent in taxes because he doesn’t want to go from ’50 Cent’ to ’20 Cent’, and I had to remind him that he was a Black person, so he can’t vote for Donald Trump and that he shouldn’t be influencing an entire swath of people who may listen to him, because he’s worried about his own personal pocketbook,“ Handler said.

The remark seemed similar to Joe Biden’s “You ain’t Black” comment, which he had made during an interview in May with radio host Charlamagne Tha God from the “Breakfast Club”, prompting heavy criticism against the former vice president. Video Below

On Friday’s #FallonTonight, @50cent’s ex-girlfriend, @ChelseaHandler, scolded him: “I had to remind him that he was a black person, so he can’t vote for Donald Trump.” If he denounces Trump, “I might be willing to go for another spin, if you know what I’m talking about” pic.twitter.com/bILbTsK7R0

The pair dated briefly in 2011, according to Us Weekly, and appeared to be friendly with one another long after their split.

However, things appeared to have soured after 50 Cent made headlines with his support for Trump.

“You used to be my favorite ex-boyfriend,” Handler replied to his tweet on Tuesday.

“Oh my God this is effecting [sic] my love life now,” 50 Cent responded. “@chelseahandler I love ya Gator, don’t let Trump and Joe Biden come between us girl.”

In response, Handler has offered to pay the rapper’s taxes should he reconsider his support for the president.

“Hey f–ker! I will pay your taxes in exchange for you coming to your senses,” wrote the frequent Trump critic on Wednesday. “Happily! Black lives matter. That’s you, f–ker! Remember?”

(Related: Naked Celebrities Team Up & Try To Educate The Public How To Properly Vote By Mail)