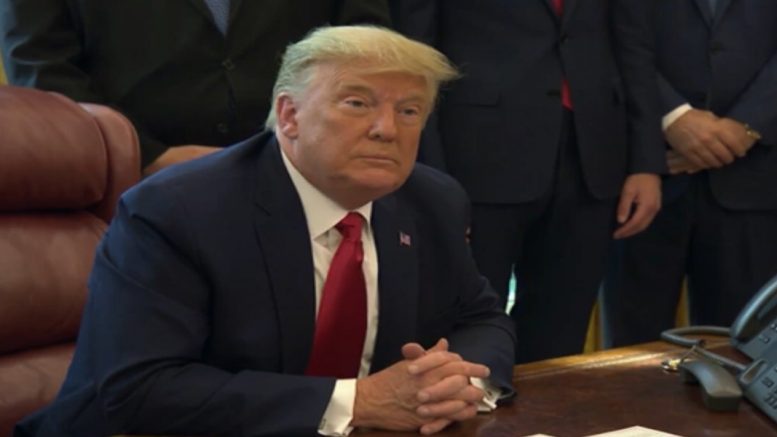 The Commander in Chief on Wednesday, vetoed a massive annual defense policy bill, objecting to the $740 billion policy legislation because it did not include a provision repealing Section 230 of the Communications Decency Act, a 1996 law that provides a legal shield to tech companies like Twitter and Facebook.

Congress passed the fiscal 2021 National Defense Authorization Act (NDAA) earlier this month with more than the two-thirds majority needed to override a veto, though it is unclear how many Republicans will buck the president in a planned veto override vote, reported The Hill.

President Trump issued a statement Wednesday after vetoing the defense spending bill to the House of Representatives:

No one has worked harder, or approved more money for the military, than I have — over $2 trillion. During my 4 years, with the support of many others, we have almost entirely rebuilt the United States military, which was totally depleted when I took office. Your failure to terminate the very dangerous national security risk of Section 230 will make our intelligence virtually impossible to conduct without everyone knowing what we are doing at every step.

The Act fails even to make any meaningful changes to Section 230 of the Communications Decency Act, despite bipartisan calls for repealing that provision.  Section 230 facilitates the spread of foreign disinformation online, which is a serious threat to our national security and election integrity.  It must be repealed. Continued Below

Additionally, the Act includes language that would require the renaming of certain military installations. Over the course of United States history, these locations have taken on significance to the American story and those who have helped write it that far transcends their namesakes.

My Administration respects the legacy of the millions of American servicemen and women who have served with honor at these military bases, and who, from these locations, have fought, bled, and died for their country. From these facilities, we have won two World Wars. I have been clear in my opposition to politically motivated attempts like this to wash away history and to dishonor the immense progress our country has fought for in realizing our founding principles.

The Act also restricts the President’s ability to preserve our Nation’s security by arbitrarily limiting the amount of military construction funds that can be used to respond to a national emergency. In a time when adversaries have the means to directly attack the homeland, the President must be able to safeguard the American people without having to wait for congressional authorization. The Act also contains an amendment that would slow down the rollout of nationwide 5G, especially in rural areas. Continued Below

Numerous provisions of the Act directly contradict my Administration’s foreign policy, particularly my efforts to bring our troops home. I oppose endless wars, as does the American public. Over bipartisan objections, however, this Act purports to restrict the President’s ability to withdraw troops from Afghanistan, Germany, and South Korea.

Not only is this bad policy, but it is unconstitutional. Article II of the Constitution makes the President the Commander in Chief of the Army and Navy of the United States and vests in him the executive power. Therefore, the decision regarding how many troops to deploy and where, including in Afghanistan, Germany, and South Korea, rests with him. The Congress may not arrogate this authority to itself directly or indirectly as purported spending restrictions.

For all of these reasons, I cannot support this bill. My Administration has taken strong actions to help keep our Nation safe and support our service members. I will not approve this bill, which would put the interests of the Washington, D.C. establishment over those of the American people. It is my duty to return H.R. 6395 to the House of Representatives without my approval. Continued Below

In order to override Trump’s veto, both the Senate and House would need two-thirds of their members to vote in favor of overriding it. The bill already passed the Senate in an 84-13 vote and the House in a 355-78 vote.

The House plans to hold its veto override vote Monday in a rare post-Christmas session.

If the House successfully overrides Trump, the Senate is planning to come back the following day. But it could still be days after that before the upper chamber holds a final override vote if senators who support Trump’s veto drag out procedural hurdles. Senators have suggested the override vote could happen the morning of Jan. 3, just before the new Congress is sworn in. 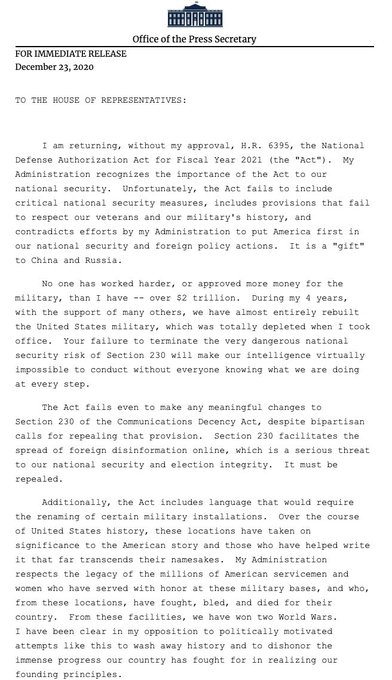 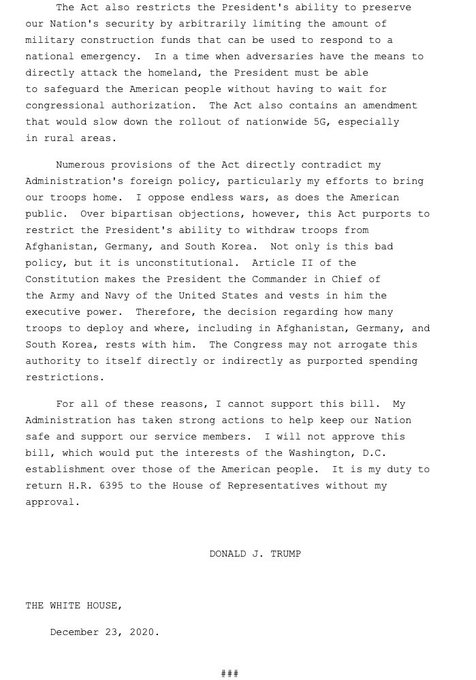 Congress should vote to Repeal Section 230 as requested by President @realDonaldTrump.

I will not vote to override presidential veto unless effort is made to wind down Section 230.

House’s refusal to wind down Section 230 for Big Tech shows they care more about Big Tech than working Americans.

Will @SpeakerPelosi refuse to allow a vote to repeal Section 230 because Democrats are in Big Tech’s pocket?

“Section 230 should be revoked immediately" for tech companies

PA Lawmakers: These Numbers Just Don’t Add Up & Certification Of PA’s Results Was In Error