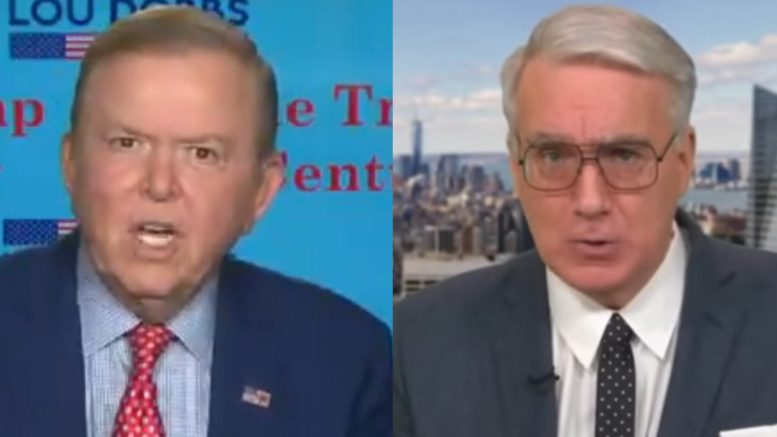 Fox News host Lou Dobbs slams Keith Olbmermann over incendiary remarks that the liberal commentator issued in regards to President Trump, his supporters and his ‘enablers.’

On his YouTube channel, Olbermann posted a video where he is heard saying, “[President Trump] and his enablers, and his supporters, and his collaborators, and the Mike Lees and the William Barrs … and the Mike Pences, and the Rudy Giulianis and the Kyle Rittenhouses and the Amy Coney Barretts must be prosecuted and convicted and removed from our society while we try to rebuild it and to rebuild the world Trump has destroyed by turning it over to a virus.”

As summarized by Fox News:

“In a 14-minute tirade, the ex-MSNBC anchor argued the FBI should identify Trump as an “unindicted co-conspirator” of the plot by members and associates of an anti-government militia to abduct Democratic Michigan Gov. Gretchen Whitmer. He went on to accuse Trump of planning to reject the results of the upcoming election and added the president should be ‘destroyed’ and ‘devoured at the ballot box.’”

In response, Lou Dobbs told Judge Jeanine Pirro that Olbermann is “the avatar of the left in this country — the radical dems.”

“That is the level of intelligence you can expect whether you are on Capitol Hill with Adam Schiff, whether you’re watching in the Senate Charles Schumer,” he added.

Related Article: Ted Cruz Fires Back After Keith Olbermann Calls For Trump’s ‘Enablers & Supporters’ To Be ‘Prosecuted & Convicted & Removed From Our Society’

“There is a rabid absurdity to them all, and they’re vicious, they’re venal and they don’t care one wit about the consequences of either their words or their actions,” Dobbs declared. “And that is what Donald Trump has been putting up with, as you well know, every hour of every day since he decided to run for President. It’s extraordinary.”

“[Keith Olberman’s] language, by the way, is consonant with that which we read in the left-wing newspapers and the news outlets — corporate news in this country. Fake news, it’s corporate news,” Mr. Dobbs proclaimed. Video Below

Fox Business host, @LouDobbs, joins me tonight to discuss the hatred of the Left and more. Take a look. pic.twitter.com/9yvNdcQwMs

Pastor Jeffress Targets Trump’s Opponents Who Are “Fantasizing” About Him Being Beaten Down: “They’re Gonna Be Sorely Disappointed”