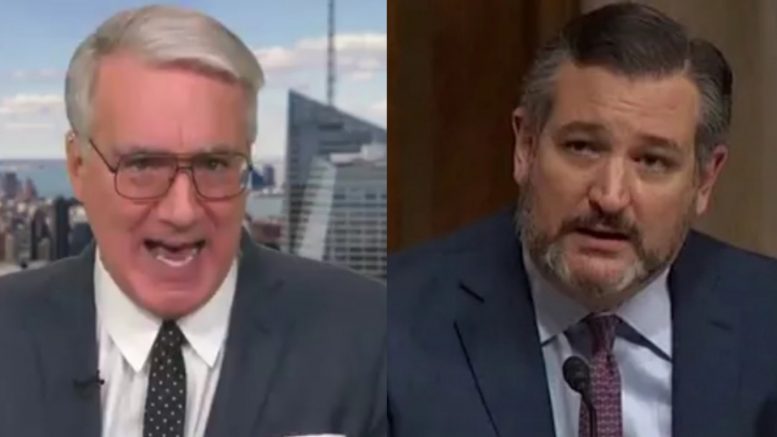 Liberal commentator Keith Olbermann called for President Donald Trump to be ‘expunged’ and his ‘enablers and his supporters’ to be ‘prosecuted and convicted and removed from our society.’

The far-left pundit made the recommendations along as part of a long-winded, anti-Trump rant that was posted to YouTube.

As summarized by Fox News:

“In a 14-minute tirade, the ex-MSNBC anchor argued the FBI should identify Trump as an “unindicted co-conspirator” of the plot by members and associates of an anti-government militia to abduct Democratic Michigan Gov. Gretchen Whitmer. He went on to accuse Trump of planning to reject the results of the upcoming election and added the president should be ‘destroyed’ and ‘devoured at the ballot box.'”

Olbermann is heard saying, “[President Trump] and his enablers, and his supporters, and his collaborators, and the Mike Lees and the William Barrs … and the Mike Pences, and the Rudy Giulianis and the Kyle Rittenhouses and the Amy Coney Barretts must be prosecuted and convicted and removed from our society while we try to rebuild it and to rebuild the world Trump has destroyed by turning it over to a virus.”

Remove ACB fr society. @KeithOlberman in YouTube rant: “Trump can be and must be expunged….His enablers…the Mike Lee’s, the William Barr’s and the Sean Hannity’s and the Mike Pence’s…and the Amy Coney Barrett’s must be prosecuted and convicted and removed from our society” pic.twitter.com/jC0AgOhAMU

Senator Ted Cruz fired back at Olbermann after seeing a clip of his remarks on Twitter.

“This is deranged & hateful,” Sen. Cruz tweeted. “Banana republics round up & imprison their political opposition, and that’s what Olberman is angrily demanding.”

“For what possible reason (beyond pure partisan hate) should Judge Amy Coney Barrett be ‘prosecuted and convicted’?” he questioned.

Olbermann recently resigned from ESPN for the second time in his career to start a political commentary program on his YouTube channel that focuses on bashing President Trump.

“I’ll be doing a new, live daily commentary series with YouTube, focused on the presidential election called, ‘The Worst Person in the World,’” Olbermann announced. “You didn’t really think I was going to sit out this election, did you?”