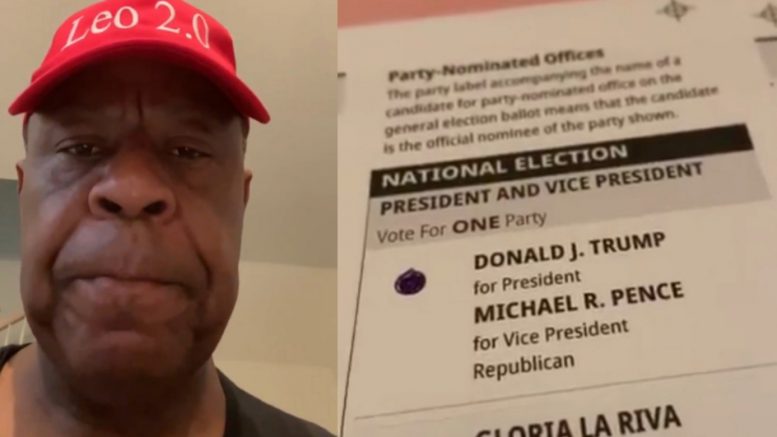 Longtime Democrat commentator and civil rights attorney Leo Terrell followed through on his word and officially casted his vote for President Donald J. Trump in the 2020 election.

Mr. Terrell has voted Democrat his entire life, but cut ties from the party after their extreme shift on issues and all-talk, no-action approach towards the Black Community.

Related Article: Leo Terrell Confirms He’ll Vote Republican ‘For The First Time’ In His Life When Voting For Trump

Leo has repeatedly touted all that President Trump has done for African Americans since taking the oath of office and is confident that more will come if Trump is re-elected.

Hence, that is exactly why he had no problem filling in the bubble next to President Trump and Vice President Mike Pence’s name on his ballot, which he sent out on Thursday.

Before posting footage of his filled-out ballot, Mr. Terrell issued a video message where he said, “Mr. President, I kept my word. I told the nation on Sean Hannity’s program I was going to vote for you. And today, I voted for you, and I hope every Democrat, especially Black Americans vote for you.” Video Below

He then followed up by posting a video of his ballot.

Two days after sending out his ballot, Terrell confirmed that his vote was counted.

Mr. President: I received the following regarding MY VOTE FOR YOU.

Hello LEO TERRELL,
This is a message from Los Angeles County Registrar of Voters. Your ballot for the 2020 General Election was received and will be counted. Thank you for voting!

In ending, here’s a clip from back in July, where Leo tells President Trump why he is voting for him during a surprise phone call on Hannity:

Vernon Jones On Fulton County Hiring Two High Profile Criminal Defense Lawyers: “There Is A Dead Cat On The End Of This Line & It’s Stinking”