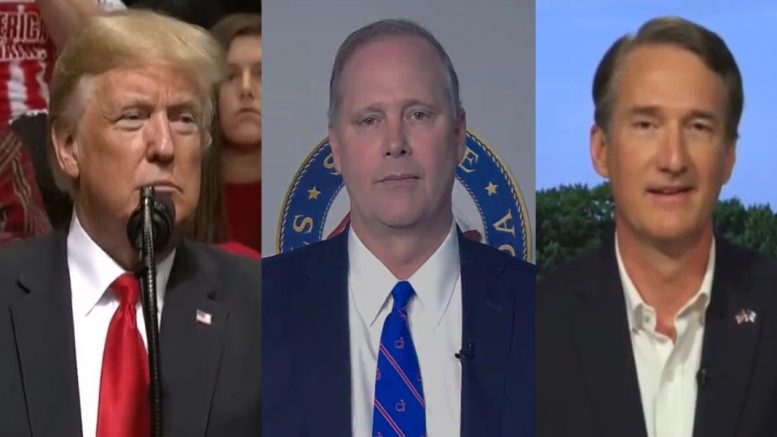 The 45th President issued two statements Tuesday from “The Desk of Donald Trump”, announcing his “complete and total endorsement” for Republican Glenn Youngkin in the Virginia gubernatorial race and for Wilton Simpson, President of the Florida State Senate (R)– urging Simpson to run for Florida Agriculture Commissioner in 2022.

Youngkin won the Republican nomination against six other candidates. He will take on the winner of the Democratic primary which is scheduled for June 8. Youngkin is a political newcomer who campaigned as a conservative, Christian outsider. He hopes to become the first Virginia Republican governor since Bob McDonnell left office in 2014, News 5 WCYB reported.

Congratulations to Glenn Youngkin for winning the Republican nomination for Governor of Virginia. Glenn is pro-Business, pro-Second Amendment, pro-Veterans, pro-America, he knows how to make Virginia’s economy rip-roaring, and he has my Complete and Total Endorsement!

Glenn is running against Bill Clinton’s longtime enabler, Terry McAuliffe. Terry McAuliffe was the Clintons’ bagman in more ways than one, from the cover-ups to the get-rich-quick schemes, and his deals with Communist China look suspicious. He was responsible for many of the problems Virginia currently has.

Virginia doesn’t need the Clintons or the Communist Chinese running the state, so say no to Terry McAuliffe, and yes to Patriot Glenn Youngkin! Continued Below

President Trump’s official statement from “The Desk of Donald Trump”: 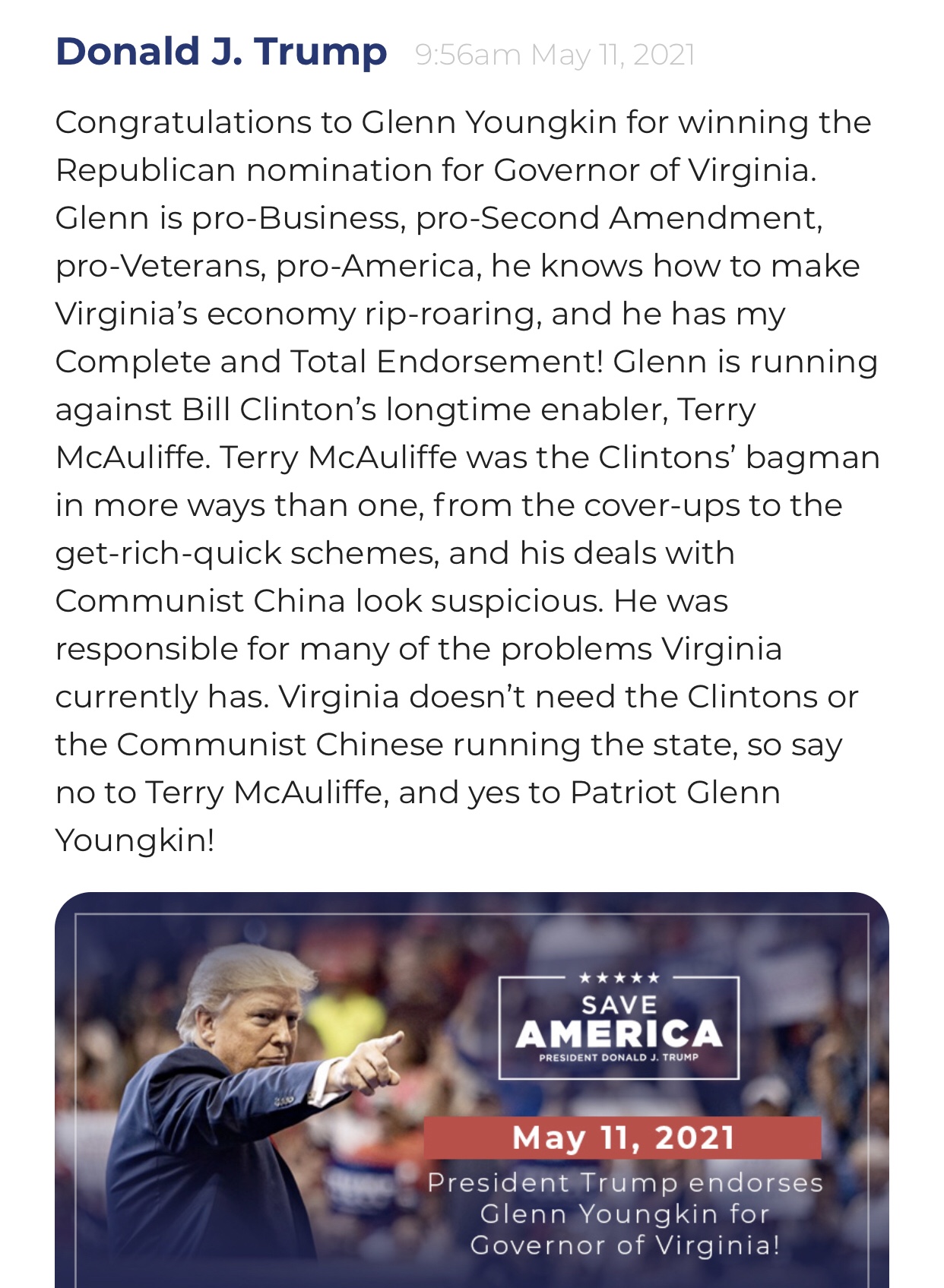 In a statement late Monday, Youngkin said, “I am prepared to lead, excited to serve and profoundly humbled by the trust the people have placed in me. Virginians have made it clear that they are ready for a political outsider with proven business experience to bring real change in Richmond.”

“We will have more to say tomorrow, but for now, let me convey my appreciation to and respect for the other candidates who courageously stepped forward to seek this nomination. Every Republican should be proud that our party inspired such a spirited, diverse and talented field of candidates. I have reached out to all of them and look forward to working together as one team to win in November,” he added. Continued Below

Though Senate President Wilton Simpson has not announced plans to run for Agriculture Commissioner in 2022, he has earned at least one big preemptive endorsement. In a second statement on Tuesday, the 45th President offered his backing of Simpson, the Republican egg farmer from Trilby.

Wilton Simpson has done an outstanding job as President of the Florida State Senate, and I hope he runs for Florida Agriculture Commissioner in 2022—he will have my Complete and Total Endorsement!

Wilton has been a great supporter and worked hard to get many good Conservatives elected in Florida. He helped us grow our Republican majority in the Florida State Senate, and gave us a historic win in Florida in the 2020 Presidential Election. Wilton will never let the great people of Florida down! 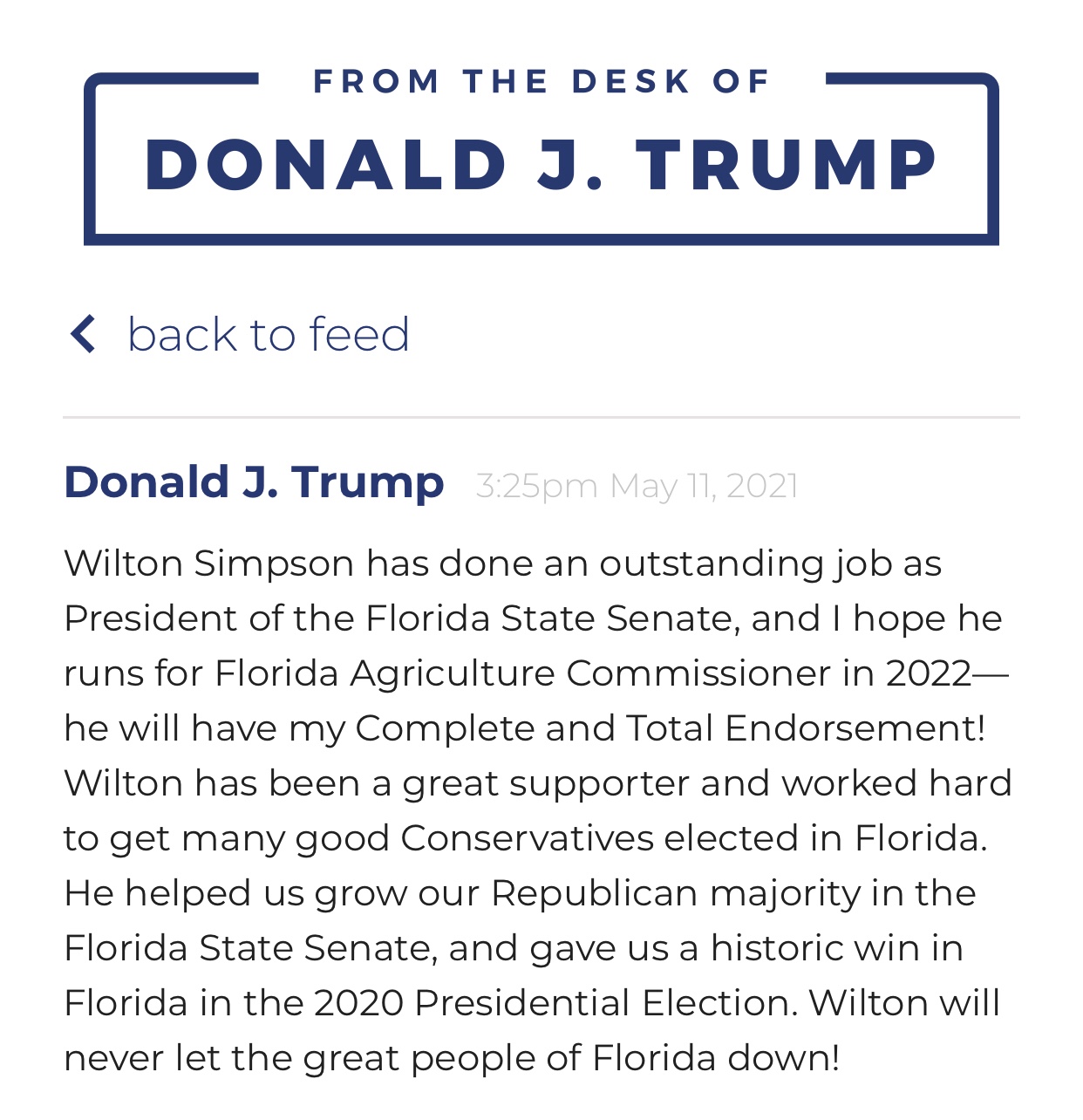 Wilton Simpson welcomed the former president’s endorsement in a statement, though he stopped short of a formal commitment to run.

Simpson told Florida Politics Tuesday: “I am grateful to President Trump for this encouragement. Having just completed a very successful Session, I am back home with my family, running my family farm. I have not yet decided whether I will continue to serve our state as an elected official beyond my term as Senate President.”

“If I do run, it would be an honor to represent our farmers who deserve a strong voice in our Government. President Trump has always stood with hard-working blue collar American workers and generational family farms like mine. It is an honor that he would stand with me should I run for Agriculture Commissioner,” he expressed.