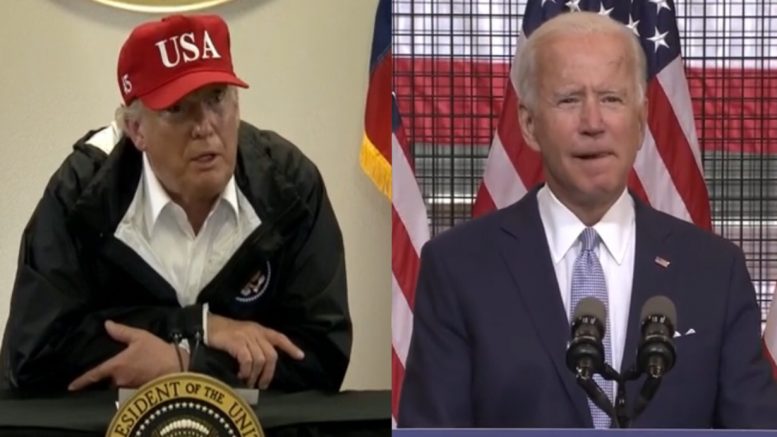 Democratic presidential nominee Joe Biden gave a 23 minute campaign speech in Pittsburgh, Pennsylvania on Monday, addressing some of the violence that has plagued cities across the country for the last 90 days, while blaming President Donald Trump.

“Just watched what Biden had to say. To me, he’s blaming the Police far more than he’s blaming the Rioters, Anarchists, Agitators, and Looters, which he could never blame or he would lose the Radical Left Bernie supports!” the Commander in Chief tweeted Monday.

These left-wing rioters are Joe Biden supporters trashing cities run by Democrats who support his candidacy. He has repeatedly given them cover by excusing their violence by calling them ‘peaceful protestors’ and accusing law enforcement of ‘stoking the fires of division.’ At the same time, he has condoned the ‘Defund the Police’ movement by agreeing to cut police funding, further egging on anti-police radicals in his party. In truth, if you listen to Biden, it’s almost impossible to tell where his campaign ends and Antifa begins. You won’t be safe in Joe Biden’s America. Continued Below

“Violence will not bring change. It will only bring destruction. It’s wrong in every way. It divides instead of unites. Destroying businesses only destroys the working families that serve the community. It makes things worse across the board, not better. It’s not what Dr. King or John Lewis taught, and it must end,” he said.

“Fires are burning and we have a president who fans the flames rather than fighting flames,” Biden claimed. “But we must not burn. We have to build. This president long ago forfeited any moral leadership in this county. He can’t stop the violence because for years he’s fomented it. You know, he may be believe mouthing the words law and order makes him strong, but his failure to call on his own supporters to stop acting as an arm militia in this country shows how weak he is.”

He continued: “Does anyone believe there would less violence in America if Donald Trump was re-elected? … [He’s] Emboldened white nationalists…  An incumbent president who sows chaos, rather than providing order … who fails in the basic duty of the job …” Video Below

Joe Biden: "Covid has taken this year, just since the outbreak, has taken more than 100 year, look, here's, the lives, it's just, when you think about it." pic.twitter.com/D3dDY6njfD

(Related: McEnany On Dems & Media Who Ignored ’90 Days Of Violence’: “That’s Like The Arsonist Blaming The Firefighter”)