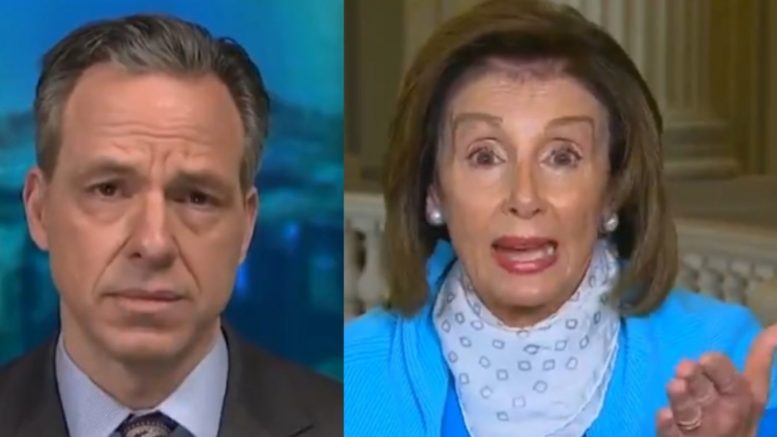 While appearing on CNN’s State of the Union on Sunday, House Speaker Nancy Pelosi appeared to downgrade President Trump’s highly-touted partial travel ban on China that was initially taken to help slow the spread of the coronavirus.

Pelosi said the ban was not “this great moment” as described by the President since tens of thousands of Americans and green card holders were still allowed back into the United States, and she implied he should have completely “shut the door.

Related Article: Sen. Blackburn Reacts As Pelosi Claims Delaying PPP Funding Wasn’t Her Fault: “She Must Have A PhD In Revisionist History”

Jake Tapper brought up that former Vice President Joe Biden’s campaign told him earlier in April that Mr. Biden agreed with Trump’s partial restriction on China, which blocked foreign nationals from traveling to the United States. “Do you agree that it was the right move by President Trump at the time?” Tapper asked.

Pelosi responded, “Actually, tens of thousands of people were still allowed from China. So it wasn’t as it is described as ‘This great moment.'”

“There were Americans coming back, green card holders coming back. But there were tens of thousands,” she proclaimed. “So if you’re going to shut the door because you have an evaluation of an epidemic, then shut the door.” Video Below

Ironically, on the same day President Trump imposed his travel restriction on China, Pelosi appeared to condemn such action, as shown in the following tweet:

This was serial fraudster Nancy Pelosi on travel bans on January 31st, as the Wuhan Virus was raging in China. She’s a disaster for the Congress, and for the country. A total train-wreck. 👇🏻👇🏻👇🏻👇🏻 pic.twitter.com/yG0AQBJNTd

In ending, here is a clip of Nancy Pelosi suggesting she is always “ready to walk” if she doesn’t get her way, even if it comes to coronavirus funding:

Nancy Pelosi brags that she’s “ready to walk” from coronavirus relief if she does not get what she wantshttps://t.co/qIKSjEpCyG pic.twitter.com/VRSNX5vyIc