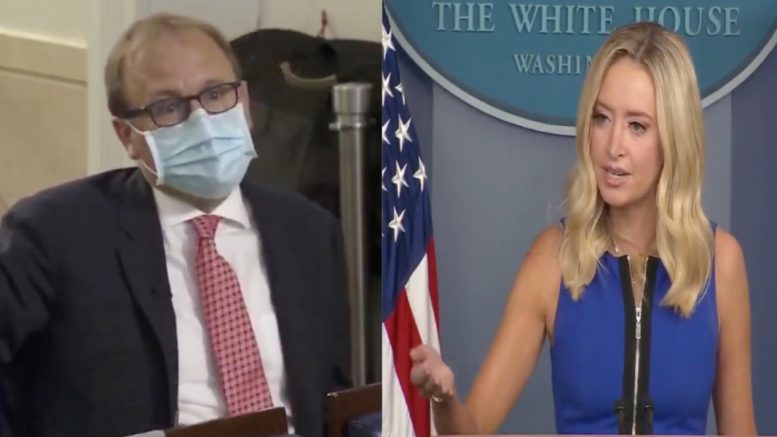 This comes after remarks made by the president in in North Carolina Wednesday, and then some in the media suggested that President Trump said to vote twice in the November election, once by mail and once in person.

“The President has been very clear about this,” McEnany said Thursday. “Once again, I’m not surprised the media is taking the president out of context. Do you recall what the president said on this matter specifically? … You should read it out for me then.”

Jonathan Karl told McEnany of Trump’s remarks over voting, saying, “I have it right here. So the president said, ‘You should go to your poll– you should vote early by mail, and you should go either early voting or day of and try to vote again’. He is asking people to vote-by-mail, and then to go down to the polling place on election day and to vote again if they can’t confirm their vote has been counted.”

Karl appeared to be referring to the Commander in Chief Thursday tweet, in which the president wrote: “On Election Day, or Early Voting, go to your Polling Place to see whether or not your Mail In Vote has been Tabulated (Counted). If it has you will not be able to Vote & the Mail In System worked properly. If it has not been Counted, VOTE (which is a citizen’s right to do).” Continued Below

Karl argued that five states “do not count any mail-in-votes until election day”, insisting “those votes won’t be counted till afterwards”, adding, “There’s no way to know whether or not their vote is counted”.

McEnany once again schooled Karl explaining how voting works. “There’s a very simple answer and this is how it works: first, a lot of states have what are called electronic poll books. And what this means is that in real time, this is updated. So if your vote is counted, they check the electronic poll book, and you will not be able to vote in person because your vote has been counted.”

“There’s a secondary situation for those who do not have electronic poll books,” she continued. “Every single state in the country, you cast a provisional ballot, and that is a ballot that is there and if your vote– if you have not filled in is counted, they will then count the provisional ballot. And that is exactly what the president is referring to.” Continued Below

She cited a 2005 study from a bipartisan commission led by former President Carter and former Secretary of State James Baker who had warned that mail ballots were at risk of fraud and coercion.

“This president is trying to enfranchise Americans, which is exactly what he’s been saying. He wants every American to have a vote, because he understand what’s Jimmy Carter understood, and what so many of us understood, until the president starting putting focus on mail-in-voting and that was this: it is subject to fraud–every vote should count, and Americans should verify their vote is counted by going to the their polling location,” she added.

"The president does not condone unlawful voting," White House press sec. Kayleigh McEnany tells @jonkarl after Pres. Trump's suggestion to supporters in North Carolina yesterday that they should attempt to vote twice, first by mail and then in person. https://t.co/nauJ1haIya pic.twitter.com/27dwgaJpwh

(Related: AG Barr Spars With CNN’s Wolf Blitzer Over The Issue Of Mail-In-Voting: “Let Me Talk!”)