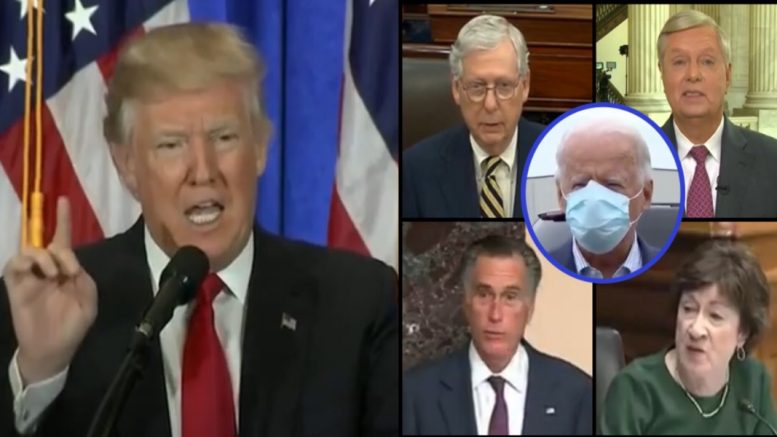 45th President Donald J. Trump issued a statement on Saturday via email from his “Save America” PAC regarding “Joe Biden’s infrastructure bill” (the Senate’s $1 trillion infrastructure package), which the former Commander in Chief called “a disgrace” and warned Republicans not to support it.

Trump, in his statement, believes if Senate Minority Leader Mitch McConnell (R-KY) “was smart”, then “he would use the debt ceiling card to negotiate a good infrastructure package”, rather than “playing right into Nancy’s hands”.

Joe Biden’s infrastructure bill is a disgrace. If Mitch McConnell was smart, which we’ve seen no evidence of, he would use the debt ceiling card to negotiate a good infrastructure package.

This is a 2,700 page bill that no one could have possibly read—they would have needed to take speed reading courses. It is a gift to the Democrat Party, compliments of Mitch McConnell and some RINOs, who have no idea what they are doing.

There is very little on infrastructure in all of those pages. Instead, they track your driving so they can tax you. It is Joe Biden’s form of a gas tax but far bigger, far higher and, mark my words, far worse. They want to track you everywhere you go and watch everything you do!

Joe Biden’s infrastructure bill will be used against the Republican Party in the upcoming elections in 2022 and 2024. It will be very hard for me to endorse anyone foolish enough to vote in favor of this deal. Continued Below

The good news is that the progressive wing in the Democrat Party will lose all credibility with this approval. Additionally, Kevin McCarthy and Republican House members seem to be against the bill. If it can’t be killed in the Senate, maybe it dies in the House!

Nancy Pelosi and the Democrats understand that this is the way to get the horrendous $3.5 trillion, actually $5 trillion, Green New Deal bill done in the House. Mitch is playing right into Nancy’s hands, not to mention the fact Chuck Schumer is already going around saying this is a big victory for the Democrats.

Whether it’s the House or the Senate, think twice before you approve this terrible deal. Republicans should wait until after the Midterms when they will gain all the strength they’ll need to make a good deal, but remember, you already have the card, it’s called the debt ceiling, which the Democrats threatened us with constantly. Continued Below

The fiery statement came just hours before the Senate voted to invoke cloture and advance the legislation on Saturday, bringing the bill one step closer towards final passage.

The Minority Leader appears to have brushed aside Trump’s rebuke, voting with 17 other Republicans to break a GOP filibuster aimed at blocking the bill.

“It is not the end, but it takes us closer to the end,” said Sen. Tom Carper (D-DE) after the cloture vote. 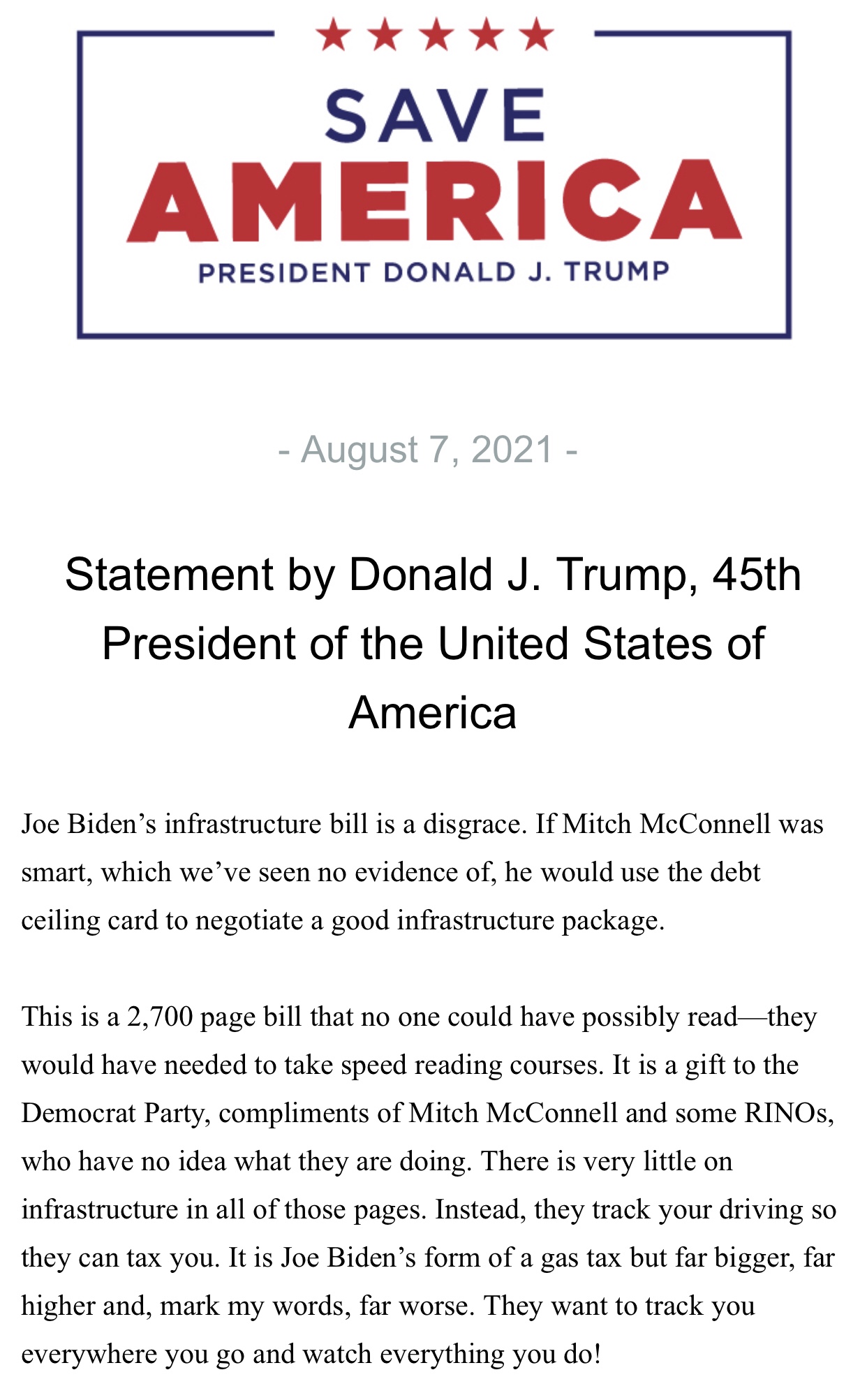 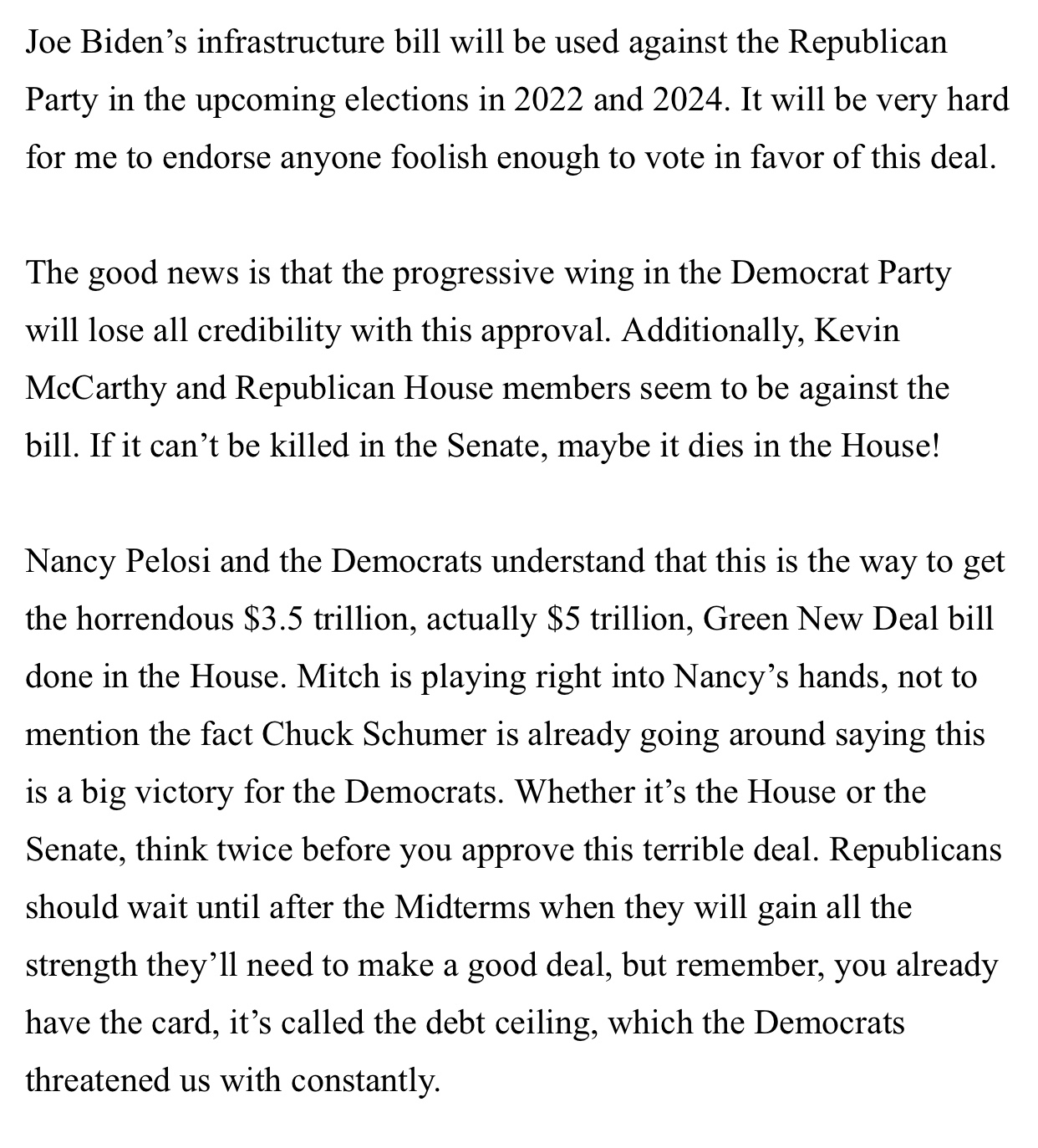 (Related: Trump On GOP ‘Caving To The Radical Dems On Infrastructure’: “Why Are RINOs So Desperate To Push Bad, Radical Leftist Policies?”)