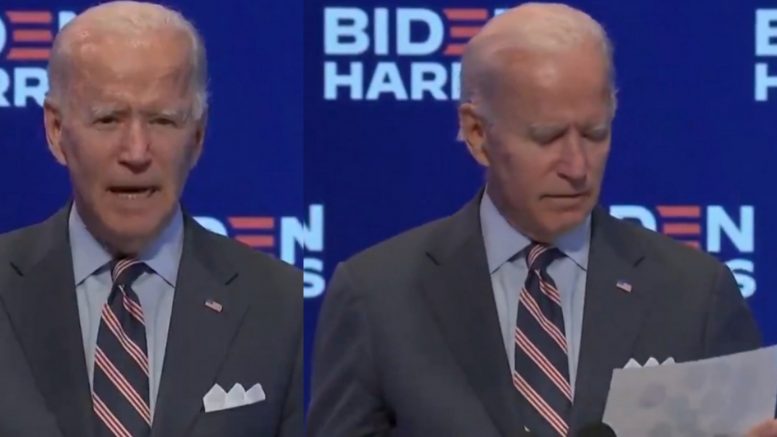 Democratic nominee Joe Biden made the rare decision to take questions from the press after delivering a speech on Wednesday, but there appeared to be a catch…

Before he could continue, the former Vice President had to pull out a “list” that he said showed where each journalist was sitting.

“I’d be happy to take some questions now if that’s OK,” Biden said. “Let me get my list here…where everybody’s sitting.”

It remains unclear why Biden needed a list to take questions, but the situation is likely to swirl more speculation in regards to him needing notes and teleprompters to make it through interviews and Q&A sessions.

One Twitter user replied, “OMG! — he’s taking preplanned questions and he’s not even hiding it anymore.”

OMG! — he's taking preplanned questions and he's not even hiding it anymore. 😂 Watch and laugh. https://t.co/hrgOabL0QI

Related Article: Jesse Watters Reveals Proof Of Joe Biden’s Use Of A Teleprompter During At Least One Interview

Just last week, Biden’s national press secretary TJ Ducklo refused to directly answer any question related to Joe’s teleprompter use, which ultimately boiled over into the weekend and led to Fox News host Jesse Watters unveiling video proof that Biden has used a teleprompter during at least one interview.

In ending, here is an ad Donald Trump Jr. tweeted that casts light on Biden’s teleprompter use:

We all know why Joe Biden's campaign refuses to answer this question…https://t.co/rFIG9oH0MY