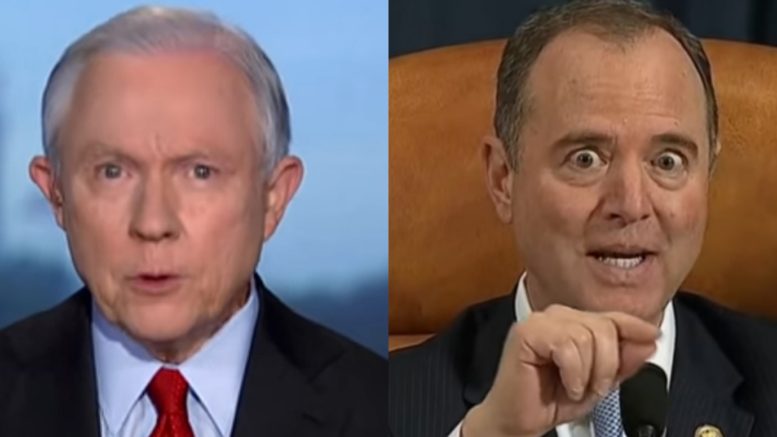 Former Attorney General Jeff Sessions is not convinced that Democrats’ impeachment inquiry is justified after seeing how the process has been shaking out.

Sessions, who is seeking to reclaim his Senate seat in 2020, weighed in on the the Democrat-led impeachment process just one day after the first public hearing was held.

In his initial remarks, Sessions said he agrees with Ken Starr who recently stated that the impeachment inquiry is unnecessary and would be handled more appropriately through Congressional oversight.

“The Constitution says that you impeach upon conviction for treason, bribery, high crimes, misdemeanors, and I don’t see that we met that test yet, Sessions stated. “Certainly, I don’t believe it will happen.”

“But it looks like the decision has been made,” he continued. “It looks like before the evidence comes in, the votes are supposedly lined up and they’re gonna be driven through to produce an impeachment that’s going to take weeks and weeks and weeks of Congressional time when we need to fix immigration, standing up to China, funding for our military — those are things that need to be the topic focus of our country.”

Sessions then urged Democrat members of Congress to “consider the Constitution” as he said, “They’re bound under their oathes to follow the Constitution. And they should not be pushing this forward.” Video Below

Related Article: Kellyanne Conway On Wednesday’s Hearing: It Showed “How Desperate Democrats Are To Figure Out A Way To Get Trump”

When asked how he thinks this all will end, Sessions said that Democrats likely have already made up their minds on impeachment, and they will “dump it on the Senate, and somehow they think this will all be helpful to them.”

“But, the Senate isn’t going to impeach on this evidence. Nowhere close to the two-thirds vote needed to impeach,” Sessions declared. “I think it’s really an abuse of the process.” Video Below