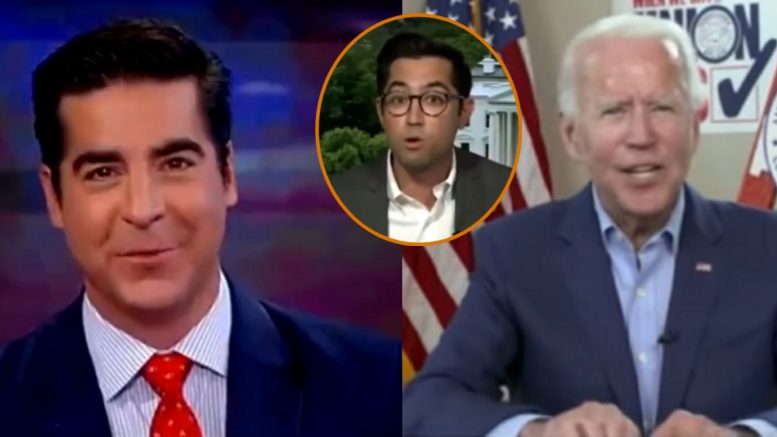 Joe Biden’s speculated use of a teleprompter has become a hot topic ever since the former Vice President answered questions from AFL-CIO union members on Labor Day.

Before answering a question, Biden paused and asked a staff member to “move up” something, which many are suggesting was a teleprompter.

Here’s another instance, where Biden appears to be motioning his staff to change the teleprompter:

Joe Biden motions to staff to change the teleprompter:

Biden’s national press secretary TJ Ducklo had an opportunity to set the record straight with Bret Baier on Thursday over whether or not Biden uses a teleprompter for interviews and Q&A sessions.

Ducklo, however, refused to answer any question related to Biden’s teleprompter use, and instead tried to spin it back at Baier, accusing the Fox host of helping the Trump campaign “funnel questions.”

On Saturday evening, Jesse Watters took matters into his own hands, when he showed the public video evidence of a teleprompter in Biden’s make-shift studio in his basement when the former VP interviewed on The Late Late Show back in April.

As per the video that Jesse shared, an active teleprompter could be seen in the reflection of a picture that Biden held up. Video Below

The @JoeBiden campaign won’t answer questions about the Teleprompter but @JesseBWatters Has a picture where you can see the reflection of it plain as day. pic.twitter.com/DbuKMubqEt

Here’s a longer clip showing the teleprompter in the picture reflection:

Jesse Watters: Dems Want to ‘Make You So Scared That They Control You’ & ‘Keep Us In A Forever Pandemic’