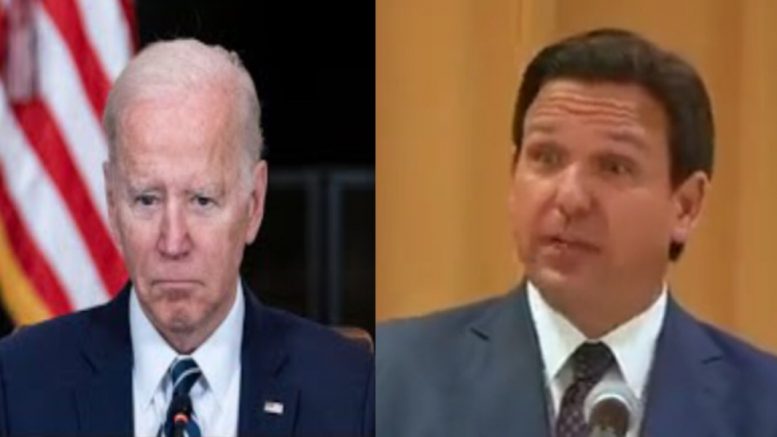 Florida Republican Governor Ron DeSantis commented last week during a press conference over circulating reports that 79-year-old Joe Biden is not happy over his plummeting poll numbers, now that they’ve sunk below those of 45th President Donald Trump.

Biden is “seething,” reports Politico, that his standing in the polls is now worse than that of Trump, “whom Biden routinely refers to in private as ‘the worst president’ in history and an existential threat to the nation’s democracy.”

Governor Ron DeSantis, during a press conference on Monday, remarked over the reporting and implied that Americans are fed up with policies from “Brandon”.

“There a fellow by the name of Brandon that people talk about that we have to contend with, and I see this news report where Biden is so frustrated that is approval ratings are in the toilet. He can’t understand it. He’s lashing out at his staff, he’s blaming other people, he’s blaming the media, even though he gets the most sycophantic media coverage any president has ever gotten,” DeSantis said.

“And so, he’s trying to make excuses. And I’m just thinking to myself, you know, what has he done since he came into office? He immediately waged war on American energy production. You see record gas prices in the United States. Well that’s a big reason why, because of his policies,” the Florida governor explained. Continued Below

“Look at what they did in terms of fiscal — monetary, printing and borrowing trillions and trillions of dollars. What did you get for that? The most sustained inflation this country has seen in over 40 years,” DeSantis said.

“He advocated for and imposed mandates and restrictions related to Covid, including having people fired from their job based on getting a Covid jab or not. That has had a hugely negative impact on the economy, and he failed to take leadership and take decision action to alleviate the supply chain crisis,” he pointed out.

“And so, he has created the circumstances that have led to this resounding disapproval of what he has done. He would’ve been better off, we would be better off if he had simply gotten into office and did nothing than what he has done so far,” the Republican governor opined. Video Below

DeSantis: There’s a Fellow Named Brandon and His Ratings Are in the Toilet

There’s a news report saying Biden is so frustrated [that] his approval ratings are in the toilet. He can’t understand it. He’s lashing out at his staff, he’s blaming other people, he’s blaming the media. pic.twitter.com/Vlca6CY0Bo

McEnany on WH Official Walking Back Biden’s Taiwan Remarks: ‘These Gaffes are Alarming–They’re Weird to Watch’

Trump To Levin On Biden’s News Conference: ‘He’ll Look Down, Get A Name & That Reporter…Will Ask A Question. Then He’ll Look Down Again & Read From His Notes & Give The Answer’

Reporter Urges Cruz To Wear A Mask At Press Briefing, Cruz Fires Back: “You’re Welcome To Step Away If You’d Like”