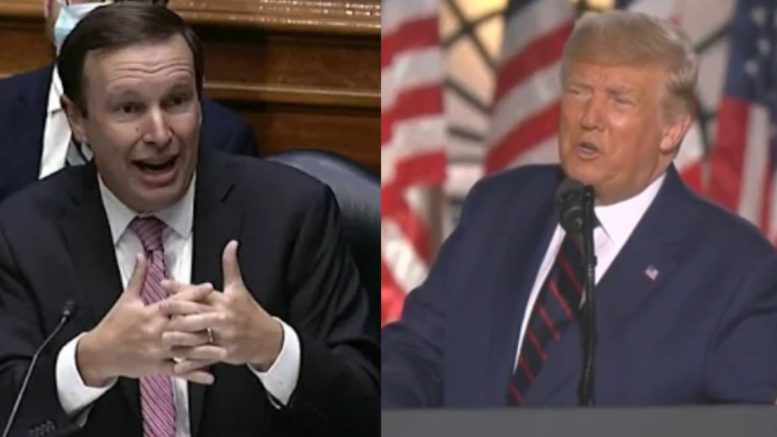 The senator cited the President’s acceptance speech that he delivered in front of a large crowd outside of the White House on Thursday, and claimed that it is Trump’s “plan” to “kill people.”

“Can we take the gloves off and tell the truth? Trump is deliberately killing people,” Sen. Murphy tweeted.

“He holds rallies where people get infected,” he claimed. “On Thursday, no social distancing or masks, sending a clear message that the CDC should be ignored.”

“His plan is to kill people,” Murphy declared. “Let’s just say it.” See Below

Can we take the gloves off and tell the truth?

He holds rallies where people get infected. On Thursday, no social distancing or masks, sending a clear message that the CDC should be ignored.

His plan is to kill people. Let's just say it.

Meanwhile, Sen. Murphy conveniently had zero criticism for the tens of thousands of Black Lives Matter protesters who congregated in Washington, DC, just one day after President Trump’s speech.

Demonstrators could be seen in videos and images not social distancing among other CDC guidelines not followed.

Twitterverse was quick to point out the hypocrisy behind Senator Murphy’s tweet in the comment section. See Below

Here are some of those reactions:

These are your party's supporters douche nozzle. Let's hear you denounce them congregating without masks and social distancing first otherwise, please do us all a favor and shut your pie hole. pic.twitter.com/LEJ4mKGAyA

In ending, here is Buck Sexton’s response to those who are constantly shaming Trump and his supporters for holding rallies while turning a blind eye to protesters:

Is CNN going to do a “where are their masks and social distancing! This is killing people!” segment on national tv, or is covid shaming only for bikers and Trump rallies?

We all the know the answer
pic.twitter.com/lB45BdAH70