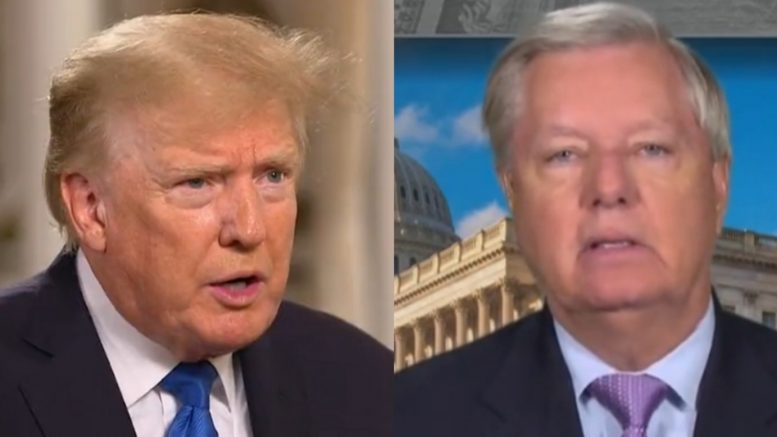 45th President Donald Trump had a few choice words for Sen. Lindsey Graham after the GOP senator publicly criticized Trump’s promise to pardon January 6th demonstrators if he is re-
elected as president in 2024.

The former president floated the idea at his latest “Save America Rally” held in Texas when he stated, “If I win, we will treat those people from Jan. 6th fairly… We will treat them fairly. And if it requires pardons, we will give them pardons. Because they are being treated so unfairly.”

Pressed over Trump’s remarks on Sunday’s airing of Face the Nation, Sen. Lindsey Graham said, “I think it is inappropriate. I don’t want to reinforce that defiling the capitol is okay.”

WATCH: @LindseyGrahamSC responds to President Trump dangling the possibility of pardons for January 6 Capitol rioters: "I think it is inappropriate. I don't want to reinforce that defiling the capitol is okay." pic.twitter.com/3HFTspixiY

Trump fired back at Sen. Graham while appearing for an exclusive Newsmax interview that aired on Tuesday.

“Well, Lindsey Graham is wrong. I mean Lindsey is a nice guy, but he’s a RINO,” Trump said before exposing double standards that suggest 1/6 demonstrators are being treated “unfairly.”

“Lindsey Graham doesn’t know what the hell he’s talking about,” declared the 45th President. Video Below

“Well, Lindsey Graham is wrong. I mean Lindsey is a nice guy, but he’s a RINO.”