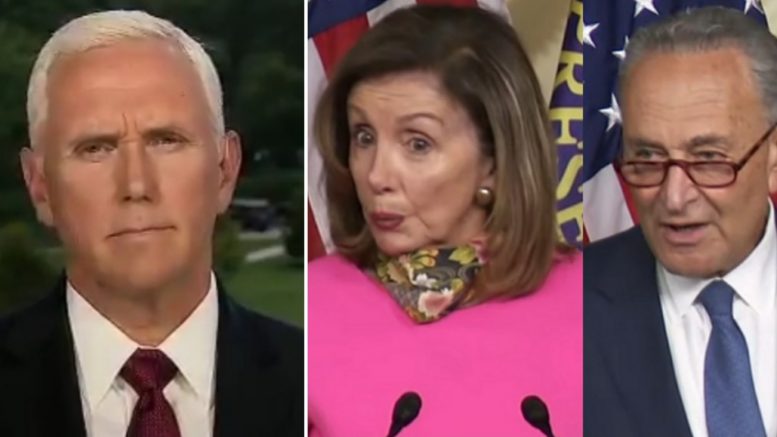 Vice President Mike Pence is now urging US state governors to push House Speaker Nancy Pelosi and Senate Majority Leader Chuck Schumer to get “back to the table” and negotiate much-needed coronavirus relief for the American people.

The suggestion made by Pence comes in wake of four executive orders President Donald Trump signed over the weekend to protect American workers as negotiations between Republican and Democrats reached a stalemate.

While speaking with Fox Business host Lou Dobbs, Pence praised Trump’s executive orders before he demanded US governors to “pick up the phone and call” Speaker Pelosi and Schumer.

“They want to see the Congress act,” Pence told Lou Dobbs, while referring to a conference call he had with state governors on Monday.

He continued, “President Trump has made it clear. In addition to the executive action that he’s taken, we’d like to send another round of checks to the American people. Remember, it was $1200 per American, $3400 per per family — the President is very open to doing just that.”

“And we said to the governors today, “It’s time for them to pick up the phone, and call Nancy Pelosi and call Chuck Schumer, and tell them to get off the dime and get back to the table, and let’s get a deal done,” Pence urged. Video Below

Get to Work: @VP Mike Pence calls on every governor to tell Pelosi & Congress to get a deal done that puts Americans first. #AmericaFirst #Dobbs pic.twitter.com/bR0o4B7nFu

In ending, here is video of Vice President Pence praising President Trump for his executive action: