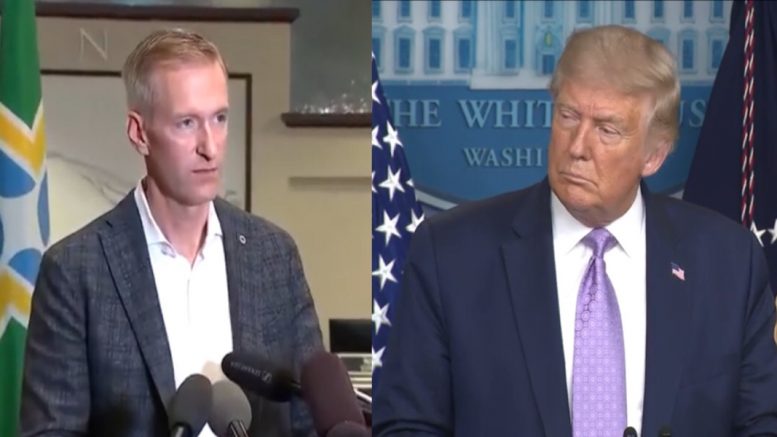 A man wearing a “Patriot Prayer” hat who reportedly participated in a caravan of Trump supporters through downtown Portland earlier Saturday evening was shot and killed on the street. Left-wing demonstrators later celebrated his killing, Breitbart reported.

“Yesterday’s events began with hundreds of cars filled with supporters of the president, rallying in Clackamas County and then driving through downtown Portland. They were supported and energized by the president himself,” Wheeler said.

“President Trump, for four years, we’ve had to live with you and your racist attacks on black people. We learned early about your sexist attitudes towards women. We’ve had to endure clips of you mocking a disabled man. We’ve had to listen to your antidemocratic attacks on journalists. We’ve read your tweets slamming private citizens to the point of receiving death threats, and we’ve listened to your attacks on immigrants. We’ve listened to you label Mexicans, ‘rapists.’ We’ve heard you say that John McCain wasn’t a hero, because he was a prisoner of war. And now, you’re attacking Democratic mayors in the very institutions of democracy that have served his nation well since its founding,” he claimed.

“Do you seriously wonder, Mr. President, why this is the first time in decades that America has seen this level of violence? It’s you who have created the hate and the division. It’s you who have not found a way to say the names of black people killed by police officers, even as people in law enforcement have,” Wheeler alleged.

“And it’s you who claim that white supremacists are good people. Your campaign of fear is as anti-democratic as anything you’ve done to create hate and vitriol in our beautiful country. You’ve tried to divide us more than any other figure in modern history. And now you want me to stop the violence that you helped create. What America needs is for you to be stopped so that we so that we can come back together as one America,” he asserted. Continued Below

As reported by Breitbart, Wheeler cited several hoaxes, including:

Before the violence occurred in Portland on Saturday, Wheeler took to twitter on Friday to announce that he sent a letter President Trump “declining his recurring offer to aid Portland by sending federal enforcement to the city.”

President Trump fired back at Wheeler in a series of tweets Sunday, calling him the “wacky Radical Left Do Nothing Democrat Mayor of Portland”, and a “fool for a Mayor”. Video Below

A Trump supporter was targeted and killed last night in Portland.

Portland Mayor @TedWheeler is blaming President Trump and his supporters.

This is absolutely unreal. pic.twitter.com/OjOaFx31nK

“Ted Wheeler, the wacky Radical Left Do Nothing Democrat Mayor of Portland, who has watched great death and destruction of his City during his tenure, thinks this lawless situation should go on forever. Wrong! Portland will never recover with a fool for a Mayor,” the president wrote.

Trump continued: “He tried mixing with the Agitators and Anarchists and they mocked him. He would like to blame me and the Federal Government for going in, but he hasn’t seen anything yet. We have only been there with a small group to defend our U.S. Courthouse, because he couldn’t do it.”

“The people of Portland, like all other cities & parts of our great Country, want Law & Order. The Radical Left Democrat Mayors, like the dummy running Portland, or the guy right now in his basement unwilling to lead or even speak out against crime, will never be able to do it!” he added.

Former Vice President Joe Biden, however, finally issued a statement Sunday afternoon condemning violence “whether on the left or the right,” but blamed President Trump for “incitement”:

Here’s @JoeBiden‘s statement on the violence in Portland:

“All of us are less safe because Donald Trump can’t do the job of the American president.”

I would expect Biden to deliver this message on TV sooner rather than later. pic.twitter.com/RA8UHQ27xN

Biden did not cite any specific statement or action by the president other than tweeting about “law and order.” Notably, Biden has campaigned on a false claim that Trump praised neo-Nazis in Charlottesville, Virginia, whom President Trump “condemned totally.” Biden has also said that he would “beat the hell out of Trump” if they were in high school.

Retweet this video every time you see it in your feed! https://t.co/9stX6B7fIp

“The only way you will stop the violence in the high crime Democrat run cities is through strength!” Trump declared.

The president called Wheeler “a weak and pathetic Democrat Mayor!!!”

(Related: Trump Fires Back At Wheeler For Rejecting Help In Portland As Protesters Congregate Outside The Mayor’s Condo)