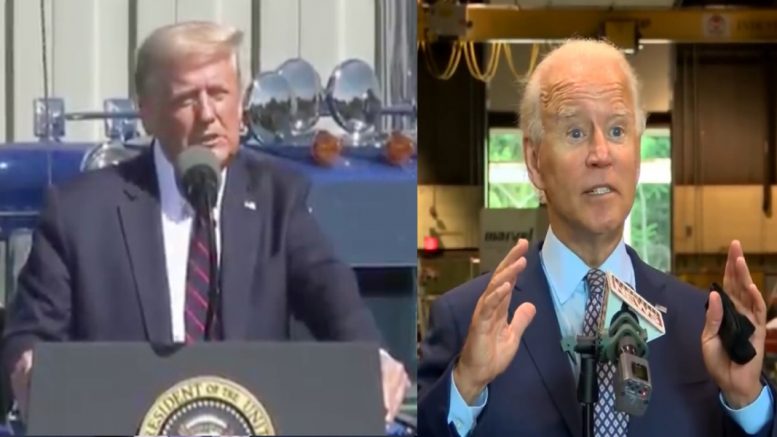 “Tonight we have Slow Joe speak at the Democrat Convention, and I’m sure he’ll just knock ’em dead. And he’ll remind us he was born in Scranton, but you know, he left like 70 years ago, right? He left a long time ago,” the Commander in Chief told the crowd.

“He abandoned Scranton. … His family had something to do with that. You know, his parents. But he left Scranton. He keeps talking about, ‘I was born in Scranton, I lived in Scranton,'” the president continued. “Yeah, for a few years, and then he left for another state. … But the Scranton stuff, that’s why I figured I would come here and explain to you one thing, but I think you people know it better than I do.”

“He left. He abandoned Pennsylvania. He abandoned Scranton. He was here for a short period of time and he didn’t even know it, and today, it’s amazing. It goes around in a circle. He still doesn’t know it,” Trump joked.

“But he spent the last half century in Washington selling out our country and ripping off our jobs and letting other countries steal our jobs– Mexico, China, all of them, just stealing our jobs. He’s been there for 47 years and now, he’s gonna come in and make a change, which I don’t think so,” the president added. Video Below

President Trump: "He abandoned Pennsylvania. He abandoned Scranton. He was here for a short period of time and he didn't even know it — and today, it's amazing, it goes around in a circle, he still doesn't know it." pic.twitter.com/jizpttfysu

At a May 20, 2019 rally in Montoursville, PA, President Trump also told a crowd, “And don’t forget Biden deserted you. He’s not from Pennsylvania. I guess he was born here, but he left you, folks. He left you for another state. Remember that, please. I meant to say that. This guy talks about oh, I know Scranton. … Well, I know the places better. He left you for another state and he didn’t take care of you because he didn’t take care of your jobs.”

According to PolitiFact, in 1953, Joe Biden’s family left Scranton. His namesake father had been commuting to Wilmington, Del., for a job cleaning boilers and decided to move the family closer to his job. Biden, 10 at the time, would have had little say in the matter.

PolitiFact, however, rated President Trump’s 2019 remarks over Joe Biden deserting Scranton as “Mostly False”, claiming: “The statement contains an element of truth but ignores critical facts that would give a different impression.”

Biden was often referred to as Pennsylvania’s “third senator” as he “visited the state frequently during his 36 years in the Senate”, and “regularly championed legislation of importance to Pennsylvania”, according to PolitiFact. Video Below

(Related: Pence On Biden Adding Kamala To The Ticket: “Confirms What President Trump & I Have Been Saying All Along”)

Trump: ‘I’ll be Making a Statement on the Never Ending Witch Hunt Tonight at Mar-a-Lago, 8:30 P.M.’