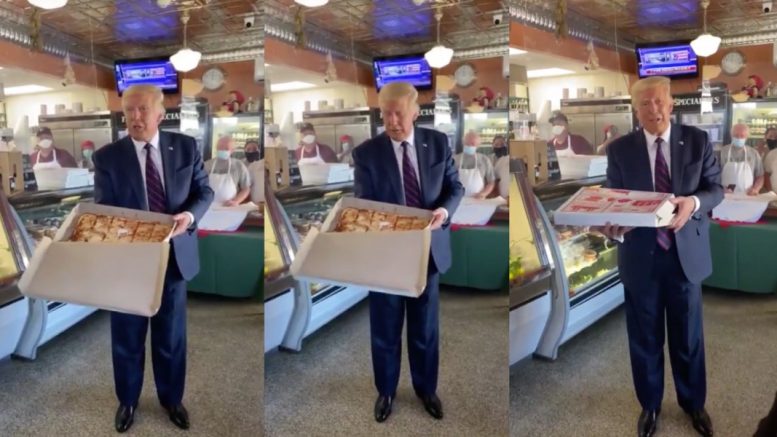 After delivering a speech to rally goers in Old Forge, Pennsylvania on Thursday, the Commander in Chief was seen in video footage making made a surprise visit to a Pennsylvania pizzeria, where he showed off his pie to reporters at Arcaro and Genell before departing the Keystone State.

Arcaro and Genell’s about section says: “After many years of dedicated effort, the town has been very successful in transitioning into a highly respected mecca for Italian cuisine and has attained the distinction of being regarded as ‘The Pizza Capital of the World'”.

President Donald Trump brandishes his pie to the press at Arcaro and Genell, saying he stopped by “because they have great pizza”, adding, “They supposedly have the best pizza, we’ll let you know in a half hour”.

POTUS shows off his pizza at Arcaro and Genell Takeaway Kitchen pic.twitter.com/vEAwbSpogl

The president tweeted video footage of supporters greeting him in Old Forge, Pennsylvania on Thursday:

We leave you with President Trump’s full remarks in Old Forge, PA:

(Related: Trump In PA: “[Biden] Abandoned Scranton… Spent The Last Half Century In Washington Selling Out Our Country”)