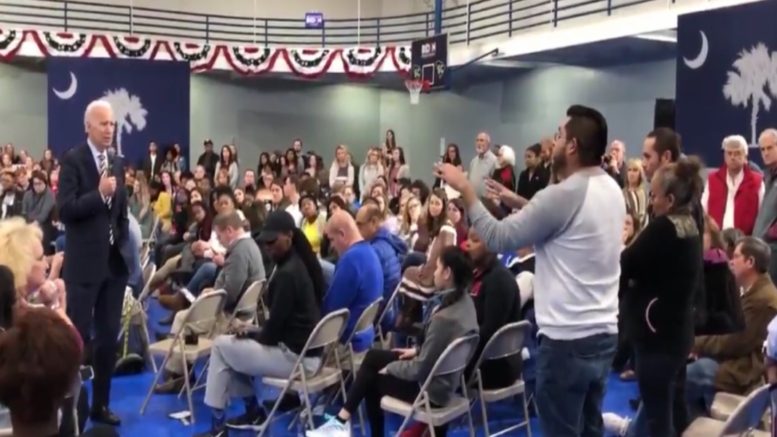 One particular protester, who asked the former vice president a question about “ending all deportation of illegal immigrants”, was directed by Biden to “vote for Trump”.

“You should vote for Trump,” Biden told Rojas.

“No, I am not going to do that,” Rojas said. “And you have the power as a candidate to actually commit to stop all deportations from day one with executive action, and we want to hear you say that,” Rojas demanded.

“I will not stop all deportations. If you commit a crime, it’s a felony,” Biden responded. (Continued Below)

The Trump administration has deported fewer overall people than were deported under former President Obama despite the ongoing crackdown on immigrants without legal status, according to The Hill.

While the Obama administration deported 1.18 million people in his first three years, the number of deportations has been a little under 800,000 so far under Trump, according to The Hill.

Last week, Acting Commissioner of U.S. Customs and Border Protection Mark Morgan, told reporters in the White House briefing room, that “78 miles of new wall has been built,” under the Trump administration. “So, right now, the 78 miles that have been built–where there was an existing form of barrier. We just started breaking ground in [Rio Grande Valley], where we’re building miles of new wall, where there has been no structure there at all,” Morgan said. (Video Below)

Joe Biden: “You should vote for Trump”; watch:

Reporter To Psaki: “Why Does [Biden] Support Abortion When His Own Catholic Faith Teaches Abortion Is Morally Wrong?”