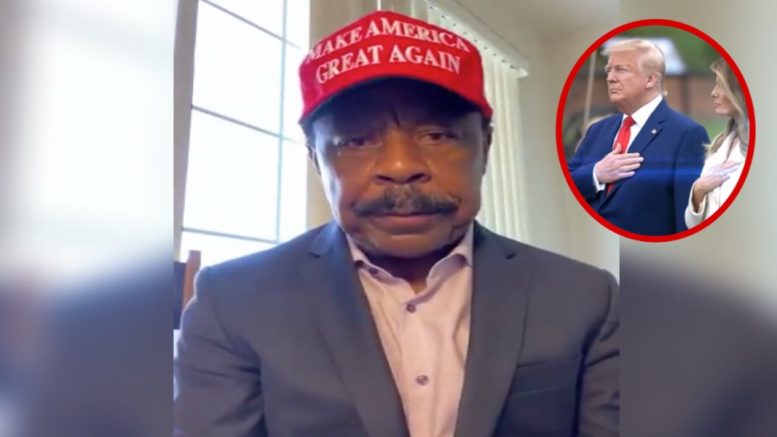 Terrell donned a red “Make America Great Again” hat in his video and thanked “every American” for supporting his position in backing the Commander in Chief.

He added: “I want to make sure everyone knows this, especially Democrats. I’m doing this because I love my country. I have received zero dollars. God bless America”. Video Below

Leo Terrell has strongly voiced his concern on Fox News’ “Hannity” over the chaos that has erupted in Democratic run cities since the death of George Floyd. He had repeatedly called on Democrat lawmakers to step up and control their cities and to condemn the violence as Americans have watched looting and businesses go up in flames. Terrell stands for law and order and supports the men and women in blue who protect and serve.

On Thursday, Terrell tweeted, “Donald Trump is the only candidate who can preserve law and order in this nation. Joe Biden is afraid of #AntifaTerrorists and will not condemn their criminal conduct . Vote Trump to save American values.”

Terrell also announced that he wants to help President Donald Trump in the battle ground states to get him reelected and stop the Democrats from taking over the White House.

Mr President, For the next 60 days I want to live in the battleground states to campaign on your behalf. We cannot allow the Democrats to take over the White House . @realDonaldTrump @seanhannity @SKMorefield @DailyCaller @FoxNews @OANN @Newsweek @newsmax

Leo Terrell on helping President Trump in the battleground states:

@realDonaldTrump @TheLeoTerrell
Mr. President! Please call on Leo Terrell to help you in the battleground states! We can't rest until every vote is counted and the election is certified! Leo is a warrior! He will help you win this fight! #Trump2020 #tcot pic.twitter.com/delhfmb4ir

Mr. President, I need to be your "warm up act" in Battleground States: We need to win Michigan, Minnesota, Wisconsin and Pennsylvania. We will become the modern day version of #LethalWeapon #VoteTrump2020 @seanhannity @realDonaldTrump @FoxNews @OANN

(Related: Leo Terrell To Biden: Black Americans Are Not Going To Vote Democrat “Just Because You Tell Us”)