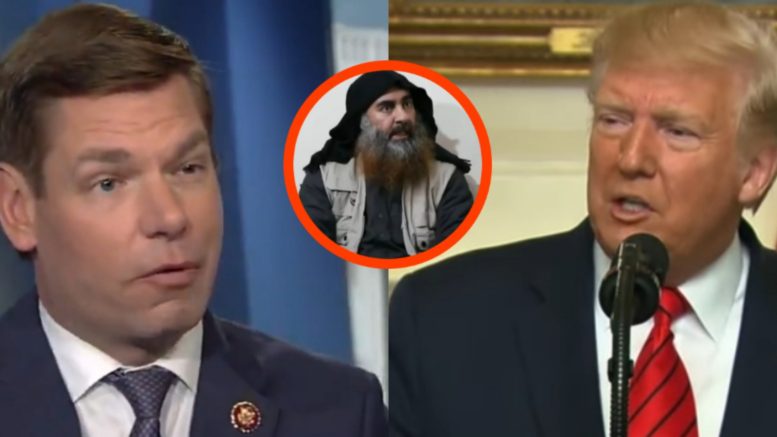 Earlier on Sunday, President Trump was proud to announce the death of al-Baghdadi, which was the result of a successful operation that was kept top secret and only a few knew about because “Washington is a leaking machine,” as Trump put it.

In his reaction, Swalwell thanked the military, the intel committee and the Kurds for a job well done, but stopped short of thanking President Trump.

Instead, Swalwell voiced concern to Chris Wallace that no one from Democrat leadership knew of the operation until after it was carried out.

“It is unfortunate that the Speaker of the House and the Gang of Eight, at least on the Democratic side, were not notified,” Swalwell said. Video Below

Swalwell went on to say that before the Osama bin Laden raid, the Gang of Eight was “read in” by President Obama, and he hopes “that doesn’t go to other issues, where we are not being informed and not able to perform our oversight authority.”

He then confirmed that Nancy Pelosi, Chuck Schumer, Adam Schiff and other top Democrat leaders were not notified by President Trump, but found it concerning that someone like Republican Senator Richard Burr was informed in advance.

“That just goes to larger concerns that the President is advocating the reponsibility to keep Congress informed, and President Obama did do that before the Osama bin Laden raid,” he said. Video Below

WATCH: Democratic member of the House Intel Committee, Eric Swalwell joined FOX News Sunday for exclusive reaction to the President's announcement on the death of al-Baghdadi. Rep Swalwell says the President did not inform Democrats of the raid. #FNS #FoxNews pic.twitter.com/t1XxJh5I4v