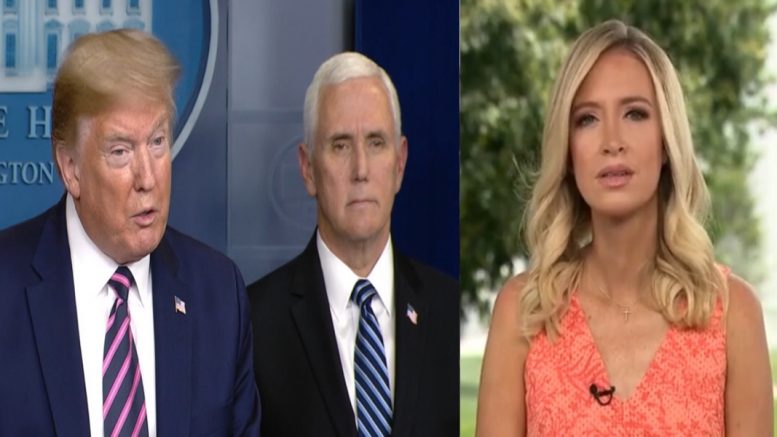 “I think it’s a great way to get information out to the public as to where we are with the vaccines, with the therapeutics, and generally speaking, where we are,” the Commander in Chief told reporters in the Oval Office Monday, after meeting with Senate Majority Leader McConnell (R-KY) and House Minority Leader McCarthy (R-CA) regarding the coronavirus pandemic.

JUST IN: President Trump says he's resuming participating in live task force briefings: "I'll do it at 5 o'clock like we were doing. We had a good slot." https://t.co/NafZaxTr88 pic.twitter.com/YGSIMQLrB7

White House press secretary Kayleigh McEnany reiterated the president’s message regarding therapeutics and the restart of the coronavirus task force briefings, during an interview with Harris Faulkner on Fox News’ “Outnumbered Overtime” Monday.

“We are in a much different phase of this virus, where we do have therapeutics, where we are fast at work on a vaccine, where we are identifying cases in the communities, rather than in the hospitals. We’ve done more than 46 million tests,” she said.

McEnany reiterated the country is in a different phase of the virus, saying: “When you have the case fatality rate here in the United States below the European Union, below the rest of the world– and the president wants the American people to know what the federal government is doing.” Video Below

“That is why he’ll be resuming those 5 PM briefings, starting tomorrow, to talk about Remdesivir and convalescent plasmas, and these innovative therapeutics– only made possible by President Trump tearing down barriers,” she continued.

(Related: Joe Biden Gets Corrected After Claiming 600,000 Americans Have Died Of The Coronavirus)