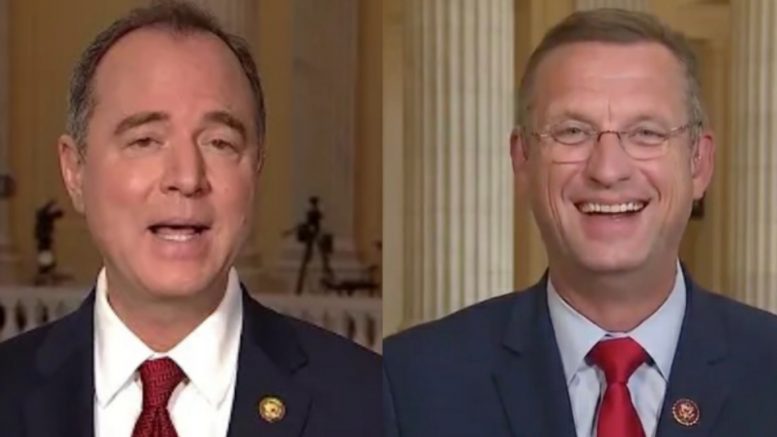 House Intel Committee chairman Adam Schiff has his heart set on continuing the neverending investigations into President Trump, even after the Commander-In-Chief leaves office.

On Saturday, Schiff told Jon Lovett of Crooked Media, “After the election, after he’s gone, then I think we have to continue to expose what he did in office because, of course, the administration has stonewalled us in every way it can.”

“They have stonewalled every subpoena, every request for information,” Schiff added. “There is a lot more evidence of the president’s wrongdoing that is being withheld and will be withheld as long as he is in office.”

In response, Congressman Doug Collins suggested that Adam Schiff should “come with a health warning.”

“He tells so many untruths, it’s just amazing — Adam Schiff…he has nothing,” Collins told Fox News host Lou Dobbs. “He has trouble with the truth. He can’t even look outside and see the sun rising because he’ll think it’s something else,” he added

“We’ve got to actually hold this accountable because when this President wins this election in November, we’re gonna actually move forward and Adam Schiff is gonna be left in a dust bin of history with all of his conspiracy theories, with all of of his conspiracies he saw ‘in plain site.'” Video Below

Schiff’s Continuous Attacks: @RepDougCollins says it is time for Adam Schiff to be held accountable for his constant conspiracies and harassment of @realDonaldTrump. #AmericaFirst #MAGA #Dobbs pic.twitter.com/6mzu4DASy6

MSNBC Guest on Inflation & High Gas Prices: ‘You’ve Got to Stop Complaining…Calm Down & Back Off’