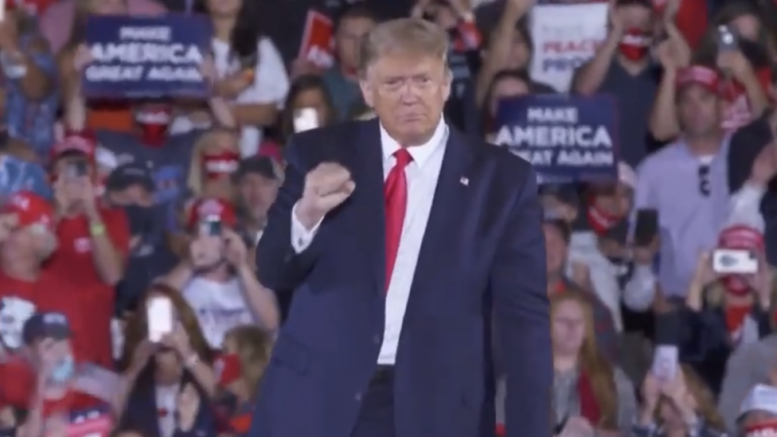 45th President Donald J. Trump issued an email statement on Wednesday regarding the “Biden Administration’s response to COVID” as new cases and deaths have skyrocketed under Joe Biden’s watch, and he called on “MAGA nation” to “rise up” against “egregious federal government overreach.”

On Monday, the U.S. reported a record 1.08 million Covid-19 infections, pushing the seven-day average of daily reported infections to 480,273, according to a Wall Street Journal analysis of Johns Hopkins University data. That is nearly double the peak reached during the previous peak last winter.

“The Biden Administration’s response to COVID is getting worse every day. Joe Biden said, ‘there is no federal solution’ to the pandemic, but he then federalized the distribution of antibodies, and red states are getting the short end of the stick,” 45th President Trump said from his “Save America” PAC.

Last month, 79-year-old Joe Biden, during call with governors, admitted he agreed with two GOP state executives that there is no “federal solution” to reduce COVID-19, even though administration is pushing federal mandates to the pandemic, as previously reported by The Freedom Times.

Trump continued: “In my administration, we respected the role of Governors to take care of their own states, and they could request antibodies and therapeutics depending on what they needed. That’s the way our Country is supposed to be run.”

On Monday, Florida Republican Governor Ron DeSantis called on the Biden Administration to release the stranglehold on life-saving monoclonal antibody treatments for COVID-19 through its allocation system and increase the supply distributed to Florida or allow states to purchase the antibodies directly. Recently, the Biden Administration announced it would be halting distribution of Regeneron and Eli Lilly monoclonal antibody treatments to states. Continued Below

The 45th President also pointed out Biden’s campaign promise to not “shut down” the economy or schools as he seeks to allegedly “shutdown” the virus, despite rising COVID-19 cases amid the alleged omicron/Xi variant.

“Now, there’s talk by the Biden Administration again about closing schools and even vaccine mandates for school children. This is an outrage, and MAGA nation should rise up and oppose this egregious federal government overreach,” Trump said in his email statement.

“The Democrats are so incredibly mandate happy—there is discussion about a vaccine mandate for school kids this year in Detroit and other Democrat-run places,” he said. Continued Below

“Our administration did what they said could not be done—vaccines in record time. But we never issued mandates, and I never would! People should be able to choose how they want to govern their own health. The federal government must be reined in and give the people back the freedom to decide whether they want to be vaccinated or not,” 45th President Trump recommended.

“Joe Biden said he would never issue mandates, but he did it anyway like so many other things,” he said, reminding Americans.

"No, I don’t think [vaccines] should be mandatory. I wouldn’t demand it be mandatory…”
Biden on December 4, 2020

In addition to Biden’s past remarks, White House Press Secretary Jen Psaki said in July 2021 that vaccine mandates were “not the role of the federal government.”

"…Our administration did what they said could not be done—vaccines in record time. But we never issued mandates, and I never would! People should be able to choose how they want to govern their own health. The federal government must be reined in…" pic.twitter.com/fP8nsjy1TX