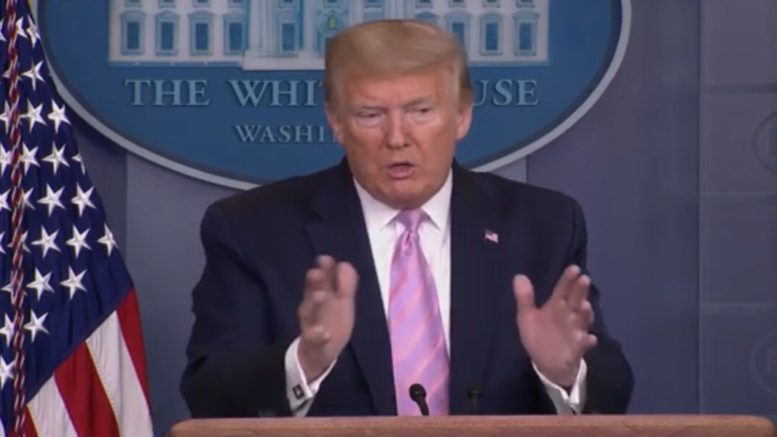 On Monday, the Commander in Chief took to Twitter to announce that he would make a decision “in conjunction” with “governors and input from others” on reopening the economy “shortly,” as the White House forms a second Coronavirus Task Force.

“For the purpose of creating conflict and confusion, some in the Fake News Media are saying that it is the Governor’s decision to open up the states, not that of the President of the United States & the Federal Government,” the president wrote on Twitter Monday.

“Let it be fully understood that this is incorrect,” he continued. “It is the decision of the President, and for many good reasons. With that being said, the Administration and I are working closely with the Governors, and this will continue.”

“A decision by me, in conjunction with the Governors and input from others, will be made shortly!” the president announced.

The second task force is set to be formally introduced Tuesday and will be chaired by White House Chief of Staff Mark Meadows, Fox News reported. Continued Below

The task force, according to Fox News, will also include members of President Trump’s Cabinet, including:

“I would say without question it’s the biggest decision I’ve ever had to make,” President Trump said during Friday’s Coronavirus Task Force. “I’ve said it before, I’ll say it again, I’ll say it always — it’s been my great honor to have been their President. I have a big decision coming up and I only hope to God it’s the right decision.”

President Trump on “the biggest decision” he’s “ever had to make”:

"The American people have been so disciplined. It's been my honor to be their President…

I've said it before, I'll say it again, I'll say it always – it's been my great honor to have been their President."pic.twitter.com/MWYH1440lN

Related: Fmr Clinton WH Chief Of Staff: “It Is Time To Look Forward At How We Can Get This Economy Reopened”)