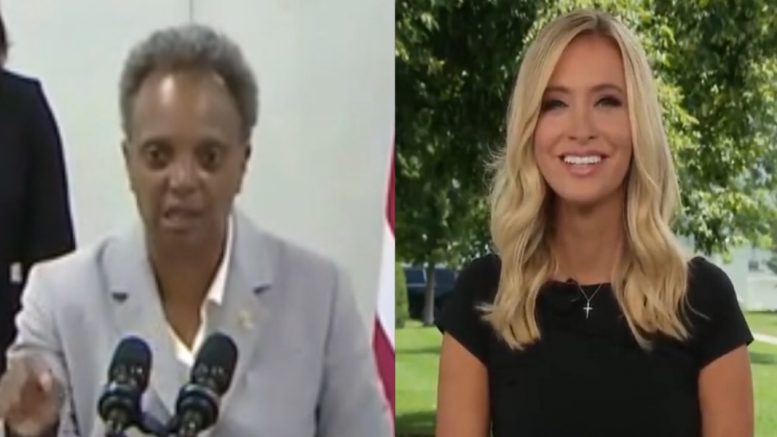 McEnany had fired back in response on Twitter to Mayor Lightfoot on Friday, writing: “While you’re focused on words, America is outraged by the violence perpetuated in our city. One person is taking action to stop violence in our streets: President @realDonaldTrump. He’s offered your city help. It’s a dereliction of duty not to take it”.

Jesse Watters told the White House press secretary on Saturday, “I guess the Chicago Mayor hates you now. Her name is Lightfoot. You said ‘I guess she wasn’t really doing her job’, then proceeded to play a clip of McEnany’s remarks from the press briefing last week.

McEnany had discussed the up rise in violent crime across the nation and mentioned Chicago’s mayor, saying the “derelict mayor of Chicago should step up and ask for federal help, because she’s doing a very poor job at securing her streets.”

Watters’ then asked the press secretary: “Karen is supposed to be some slang for a bossy, middle-aged white woman. I don’t know, you don’t even look middle-aged. You look younger than that. But what is your response to the mayor of Chicago?” Continued Below

“My response is that I’m very upset about the violence in the streets of her city,” McEnany replied. “She’s focused on words, instead she should be focused on action.”

“Right now– this weekend, we’ll see, but hopefully not, but what we’ve routinely seen are double-digit numbers of people dying in her city. So, she needs to focus on securing her streets. I understand the truth hurts. The president’s written her a letter– offered her help, and she needs to take it,” she recommended.

“It’s inexcusable when children die– Democrat run streets of Chicago– Mayor Lightfoot should be focused on that,” McEnany advised. “It’s a tragedy.” Video Below

(Related: Reporter Rolls Her Eyes After McEnany Points Out How Chicago’s Mayor Is Doing A ‘Very Poor Job’)