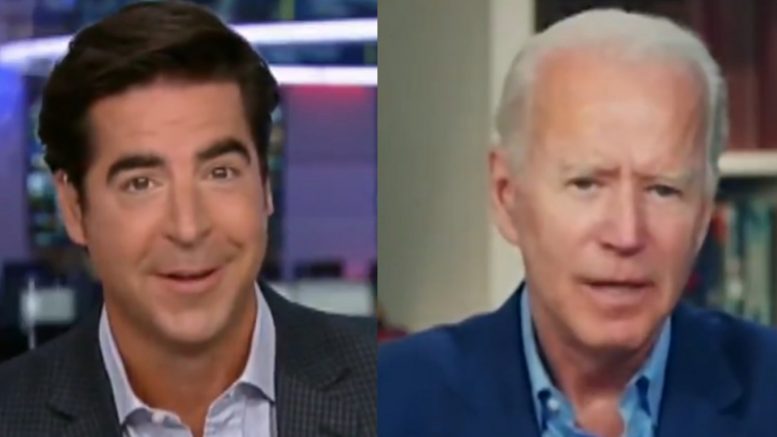 Fox News host Jesse Watters thoroughly detailed why he thinks Joe Biden is nothing more than “a radical lunatic who will destroy the country.”

Watters presented several clips to back up his notion, including remarks and ideas made by Biden in regards to the Green New Deal, health care for all, immigration, gun control and increasing taxes among other issues.

“Biden is way left,” Watters declared. “I’m gonna show you Biden issue by issue and when I’m finished, you’ll see he’s a radical lunatic who will destroy the country.”

“He’s either dumb or crazy,” he added after playing clips of Biden discussing his plan to get rid of fossil fuels, including oil, gas and coal.

“He wants to get rid of what powere the world,” Jesse said. “Biden backs the Green New Deal. We’re basically looking at AOC in a suit and tie.”

Then after bringing forward Biden’s idea to undo President Trump’s tax cuts and raise taxes, Watters asserted, “Biden will soak you til you’re broke…it’s no joke. He’ll destroy the recovery with taxes and regulations just like Obama did.”

“Joe is just going with the flow,” Jesse continued after bringimg up Joe’s stance on illegal immigration and health care for all. “Biden is following Bernie’s lead on everything. Biden and Bernie forged a little unity pact. Isn’t that cute? Biden basically said to Bernie, ‘I’ll do whatever you want, just make the bros vote for me because my voters aren’t that into me.’…Biden’s just not tough enough to stand up to the mob. He isn’t even tough enough to stand up to Bernie. Bernie lost and Bernie is still calling the shots.”

Joe Biden: The Dangerous Liberal- That is the subject of tonight’s Watters’ Words. WATCH📺 #FoxNews pic.twitter.com/tLz1OiQaA8