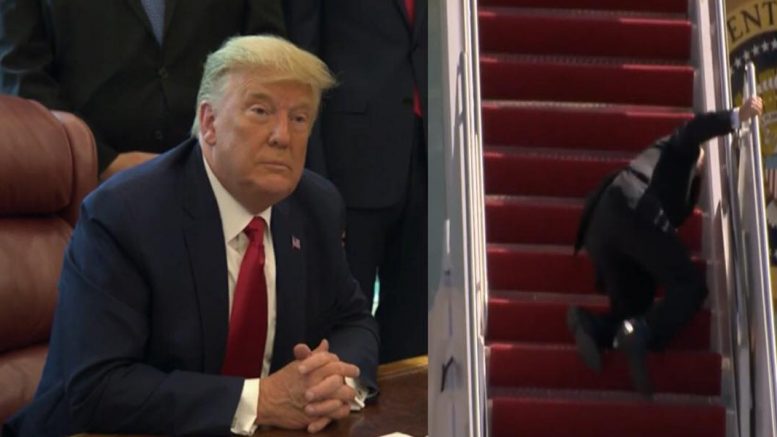 The 45th President spoke to Greg Kelly Monday, telling the Newsmax host that he “expected” Joe Biden’s fall on the steps of Air Force One and believes that Biden’s mental state may be diminished to the point where he may not understand what he is actually signing, opening the door to the 25th Amendment, in which Kamala Harris would replace him.

“You saw him take that terrible tumble on Friday. I was surprised he went down not once, not twice, but three times– almost no mention of it on the Sunday shows. I know that they gave you a hard time once when you walked a little bit slowly. Were you as shocked as I was or maybe you weren’t, maybe you expected something like that to happen?” Kelly asked former President Donald Trump.

“I expected it, actually,” former President Trump said. “When I went down the ramp at West Point, which was like a sheet of ice with no railing, no nothing–great planning– I wanted to go inch by inch, because the last thing I want to do is take a tumble like Biden did. Now that tumble was terrible and it wasn’t really one, it was three.”

Last year, House Speaker Nancy Pelosi planned to introduce legislation and create an independent commission to assess a president’s ability to carry out his duties. She claimed at the time “This is not about President Trump”, which prompted the 45th President to tweet, “Crazy Nancy Pelosi is looking at the 25th Amendment in order to replace Joe Biden with Kamala Harris. The Dems want that to happen fast because Sleepy Joe is out of it!!!”

“Look, I hope– that’s a very serious thing, and I hope that never happens, but it’s certainly– there’s something going on. It’s crazy what’s happening and you wonder whether or not all of the things that he’s signing, whether or not he understands what he’s signing, because this is worse than Bernie Sanders at its worst point,” he expressed over Biden’s seemingly mental decline.

“We never thought this could happen. Bernie Sanders on steroids wouldn’t be signing what this guy is signing,” the 45th President added. Video Below

(Related: Trump: “The Biden Administration Has Turned A National Triumph Into A National Disaster”)