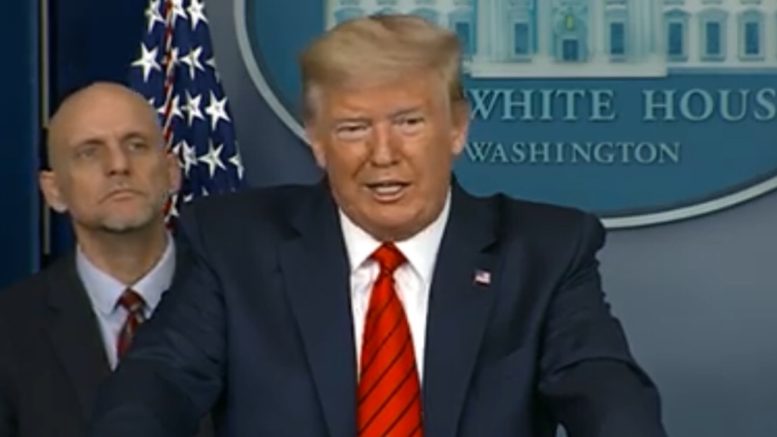 A new study reveals that hydroxychloroquine, a drug that was developed over half a century ago to treat malaria, is showing signs that it may help cure COVID-19 when combined with an antibiotic.

On Thursday during a White House Task Force briefing, the Commander in Chief announced the FDA approval of Hydroxychloroquine for treatment of the coronavirus.

Hydroxychloroquine, sold under the brand name Plaquenil — and also used to treat arthritis and other ailments — was determined to be effective in killing the deadly bug in laboratory experiments, Forbes reported, citing findings published March 9 in the Clinical Infectious Diseases journal.

“A drug called Chloroquine or Hydroxychloroquine– this is a common malaria drug. It’s also a drug used for strong arthritis … also uses this in somewhat of a different form. But it is known as a malaria drug and it has been around for a long time and it’s very powerful. The nice part is it’s been around for a long time. So, we know if things don’t go as planned, it’s not going to kill anybody,” the president explained Thursday.

The president said that the United States is going to be able to make Hydroxychloroquine available “almost immediately” and noted that the drug has gone through the FDA process and “has been approved”. (Continued Below)

“We’re gonna be able to make that drug available by prescription or by states. I spoke with Governor Cuomo about it at great length last night and he wants to be first [in] line. So I think that’s a tremendous promise based on the results and other tests. … Normally the FDA would take a long time to approve something like that and it was approved very, very quickly. … Individual states will handle it, … doctors will handle it. I think it’s gonna be great,” President Trump said.

French physician-researchers have completed a largely successful clinical trial using the drug — approved for use in the US in 1955 — to treat confirmed COVID-19 patients, according to a study published Wednesday.

A total of 36 patients — including 20 treated individuals and 16 infected controls — were enrolled in the study, led by Didier Raoult, an infectious disease expert from l’Institut Hospitalo-Universitaire in Marseille. The treated group was given 600 mg of Plaquenil each day, reported the New York Post. (Video Below)

The researchers found that 50 percent of the treated group turned from positive to negative for the virus by the third day — and by day six, that figure was up to 70 percent, reported the New York Post.

Of the 20 test patients, six who were treated with both Plaquenil and the antibiotic azithromycin showed impressive results — with five testing negative at day three. All six of them tested negative at day six, as per the Post.

Wednesday night on Fox News’ Tucker Carlson, Gregory Rigano said that a peer-reviewed study shows that 100% of patients, after 6 days of taking a Malaria drug were cured.

A peer-reviewed study shows that 100% of patients, after 6 days of taking a Malaria drug were "virologically" cured

This is, reportedly, the 2nd 100% cure to a virus that has ever existed

RT If President @realDonaldTrump should immediately move to make this available pic.twitter.com/D2bRTj2Rv9