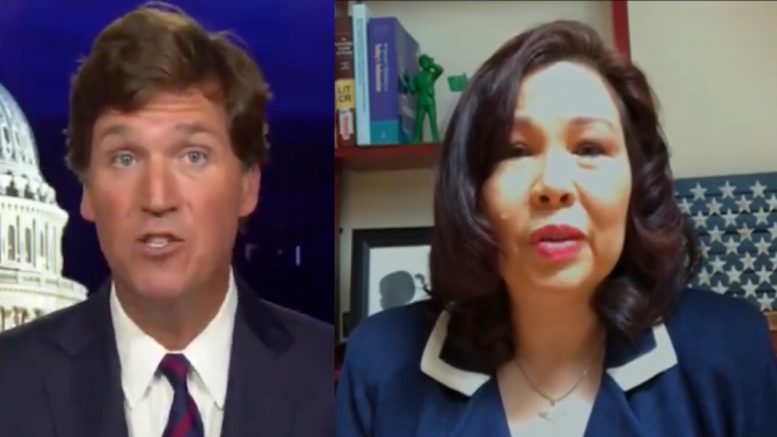 Fox News host Tucker Carlson doubled down on his criticism toward Sen. Tammy Duckworth (D-IL) on Tuesday night, calling her a “coward” for refusing to come on his show without a public apology.

“Apparently Tammy Duckworth saw what we said. She didn’t disagree with it exactly, instead she questioned our right to criticize her at all since she was once injured while serving in the Illinois National Guard. That’s what passes for an argument in modern identity politics. They don’t address the points you make, they question your right to make them at all,” Carlson explained.

Tucker Carlson said his show reached out to Senator Tammy Duckworth’s office to invite her on the program to have a “vigorous, reasoned exchange between adults.” But he said a representative “informed us that before even considering our request, we must first issue a public apology for criticizing” the senator.

“In other words, I will not debate you, until first you admit you’re completely wrong,” he said sarcastically of the Illinois Democrat.

“Keep in mind that Tammy Duckworth is not a child, at least not technically– she is a sitting United States senator, who is often described as a hero,” he said. “Yet Duckworth is too afraid to defend her own statements on a cable TV show. What a coward.”

“Tammy Duckworth is also a fraud,” Carlson added, mentioning whistleblowers “who came forward from a VA Hospital in Illinois [who] approached Duckworth to report the widespread mistreatment of sick veterans”. Continued Below

“The whistleblowers met with Duckworth three times. She refused to help them,” Carson said, noting a story from 5 years ago when Duckworth was a sitting member of Congress.

During a radio appearance in 2016, Veterans Affairs whistleblowers Germaine Clarno and Dr. Lisa Nee claimed that Rep. Tammy Duckworth did little to respond to their claims of mistreatment of veterans and corruption within the Hines VA. According to their allegations, Duckworth was largely unresponsive to evidence related to veteran mistreatment and inadequate investigations conducted by the VA’s inspector general, NBC Chicago reported.

“According to a cardiologist who attended those meetings, Duckworth dismissed the systemic cruelty inflicted on dying veterans by saying, ‘That’s just how it is at the VA’. … This is the person lecturing the rest of us about her moral authority as a veteran. Spare us,” Carlson said. Video Below

“Tammy Duckworth is a callous hack who ignored the suffering of actual veterans when it actually mattered. She has no moral authority. She is just a politician like the rest of them. She works for us. This is a democracy. She has an obligation to explain herself and answer our question,” Carlson added.

We have every right to fight to preserve our nation, heritage and culture. When vandals like Tammy Duckworth and Ilhan Omar tell us that we’re not allowed to question their patriotism, as they scream about how horrible this country is, we have every right to laugh in their faces. pic.twitter.com/0xjVtUaG3P

Carlson and Duckworth have been feuding since the Fox News host criticized her for backing a “national dialogue” on whether to remove memorials for George Washington and Thomas Jefferson in a Sunday CNN interview. Continued Below

“You’re not supposed to criticize Tammy Duckworth in any way because she once served in the military,” Carlson said during his Monday show. “Most people just ignore her. But when Duckworth does speak in public, you’re reminded what a deeply silly and unimpressive person she is.”

“It’s long been considered out of bounds to question a person’s patriotism. It’s a very strong charge, and we try not ever to make it. But in the face of all of this, the conclusion can’t be avoided. These people actually hate America. There’s no longer a question about that,” he added.

Duckworth responded to Carlson’s comments in a tweet, asking if the Fox News host wanted “to walk a mile in my legs and then tell me whether or not I love America.”

Does @TuckerCarlson want to walk a mile in my legs and then tell me whether or not I love America?

(Related: Tucker Carlson Triggers A Reaction Out Of Sen. Duckworth Over Her Stance On Forefathers’ Statues)