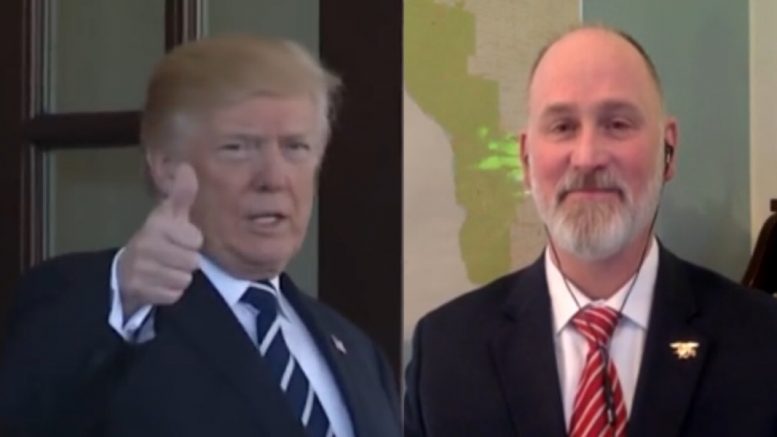 Trump’s endorsement comes after Democratic Rep. Ron Kind (WI) announced on Tuesday that he will not seek reelection. “The truth is I’ve run out of gas,” he told reporters, in part.

He strongly supports our Military, Veterans, Law Enforcement, and he will always fight for Secure Borders, the Second Amendment, and our incredible Farmers.

Derrick has my Complete and Total Endorsement! Continued Below

Van Orden challenged Kind in 2020, but ultimately lost to the longtime congressman by less than 3 percentage points. He quickly announced that he would run for the seat again in 2022 and racked up endorsements from prominent Republicans such as House Minority Leader Kevin McCarthy (Calif.).

His looming retirement is a major blow to Democrats, who are gearing up for a tough fight next year as they look to hold onto their narrow House majority. Even before announcing his retirement, House Republicans had indicated that they would target his district aggressively. Continued Below

He expressed on Thursday that he was ” incredibly proud to receive his endorsement for my congressional run” from President Trump.

President Trump inspired millions of Americans by reminding us that this is the greatest nation on earth and worth serving. He carried the 3rd District in 2016 and by an even higher margin in 2020. I am incredibly proud to receive his endorsement for my congressional run. pic.twitter.com/u7SezvPzTq

After Rep. Kind announced his plans to step down, Van Orden tweeted on Tuesday, “I would like to thank Kind for serving in Washington for the last 24 years, and I wish him the best in his retirement. Todays announcement indicative of what I hear every day as I travel the 3rd district: Wisconsinites want a change.”

He added, “Wisconsin and America is ready for a change. We are done with @SpeakerPelosi and her radical socialist agenda.”

Wisconsin and America is ready for a change.

We are done with @SpeakerPelosi and her radical socialist agenda. https://t.co/511ZiEtfYY