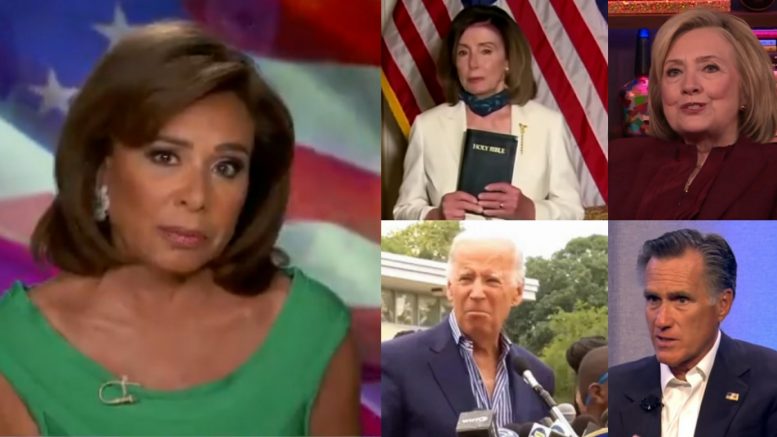 Judge Jeanine Pirro put America’s leaders on full blast regarding the “unruly lawlessness” that has plagued America over the past several weeks.

“This mob rule is all about creating chaos to defeat President Trump,” Judge Jeanine declared before turning her attention to weak leadership on both sides of the aisle who are not speaking against the mass looting, arson, vandalism and violence that’s erupted across the country.

Related Article: Jesse Watters: “Democrats Want To Run On An Issue, They Don’t Want To Solve An Issue”

“Where is the guy running for President, Joe Biden?” she continued. “He’s not criticizing this, and he doesn’t even need to come out of his bunker to say the obvious. He needs to take a stand. Or is he in favor of this? Is he in favor of this unruly lawlessness?”

“And where is Nancy Pelosi?” Judge Jeanine asked.  “Her only thought: Blame Republicans for the death of George Floyd.”

“And where is Hillary Clinton? She hasn’t stopped yapping since she lost the election,” she added.

“And where is the course of people we elected — the people we campaigned for, gave money to, believed in to stand up for our law and order?” Judge Jeanine asked before calling out Barack Obama, Mayor Lightfoot and other Democrats who she says are “at best, hands off and at worst, encouraging the lawlessness.” Video Below

Greg Kelly Questions If Biden Is Really In Control, Indicates The Three ‘Most Powerful People’ He Suspects Are In Charge