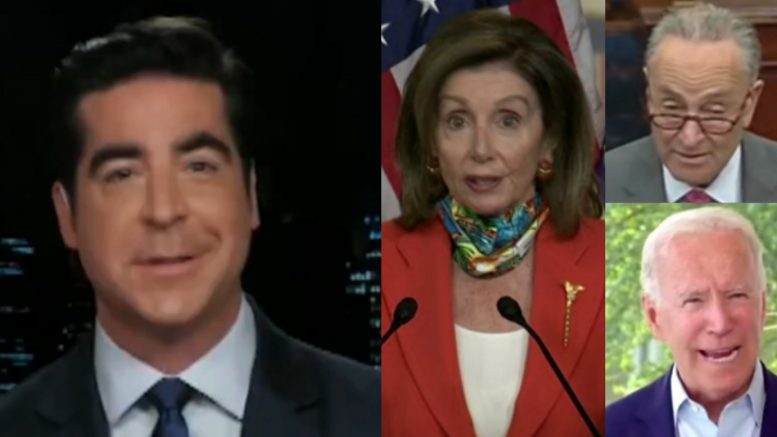 On Saturday, Fox News host Jesse Watters broke down the movement to bring reform to the traditional way of policing in America.

While far left groups and Democrat leaders seem adamant about wanting to bring change to law enforcement, Watters thinks it’s nothing but all talk and no action. And he believes that Democrats are more interested in stretching out the issue to the Novemember election rather than trying to find a solution to the issue.

As an example, Jesse pointed out how Republican senators at the lead of Tim Scott designed a justice reform bill, known as the Justice Act, which was completely shut down by Senate Democrats, who won’t even consider negotiating on it.

Watters mentioned that Sen. Scott offered amendments to his the Justice Act, but Democrats “said no, and they just bottled it up.”

“Hell, Democrat mayors in every single city in America — they can reform their police departments themselves. They don’t need Congress,” he added.

“Democrat mayors can ban chokeholds right now. They can do whatever they want. But the dirty little secret is Democrat mayors need strong policing because if the police are weak, crime skyrockets and the liberal mayors won’t get re-elected they won’t get the donations, and the businesses leave and the people move to the burbs,” Jesse proclaimed. Video Below

“Democrats want to run on an issue – they don’t want to solve an issue.” #WattersWords PART 1 pic.twitter.com/sOpyx4tyu1