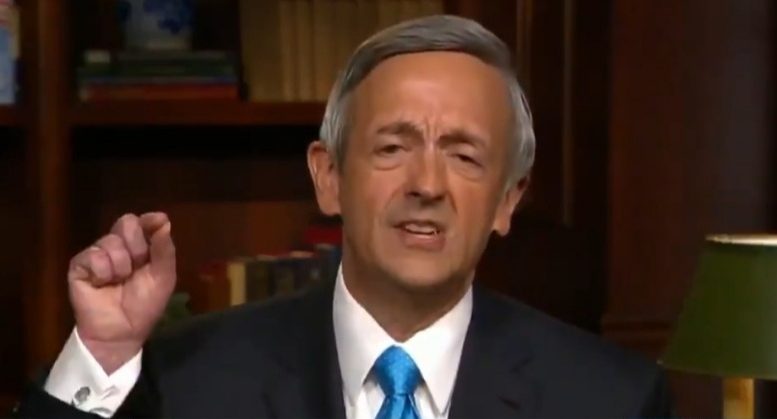 Pastor Robert Jeffress ripped leftist the leftist push to dismantle and defund the police in wake of nationwide protests related to the death of George Floyd.

Jeffress told Fox News host Lou Dobbs that although the problem of racism still exists in America and sometimes law enforcement handles situations the wrong way, that does not make it right to dismantle the police. And he thinks such an idea is “absurd” and “foolish.”

Related Article: Pastor Jeffress On Trump Holding Up Bible At St. John’s Church: “Every American Needs To Thank God Daily For A President Like Donald Trump”

“This whole idea of dismantling the police, that is an absurd idea that leads to hurt not just in the white communities but in African American communities and throughout America,” Jeffress said.

“You know in Roman’s 13, the Apostle Paul said, ‘Government authorities are established by God. They’re ministers of God who execute punishment against those who do what is evil.’ And when Paul wrote those words, Rome was in control. They had executed Chris 30 years earlier. They would behead Paul ultimately,” he pointed out.

“Paul knew above all people that law enforcement doesn’t always get it right — that that is no excuse for eliminating law enforcement,” Jeffress continued. “And to do so is foolish. I think about that Bible verse, ‘Seeking to be wise, they became fools.'”

“The left is nothing but fools when they try to replace God’s idea with their own foolish idea to dismantle the police,” he declared.

‘Nothing but Fools’: @robertjeffress explains why the Radical Left is foolish for trying to replace God’s idea of law enforcement with their own idea of dismantling the police. #AmericaFirst #MAGA #Dobbs pic.twitter.com/zsFmqlnoJI

Father To Pull 2nd Grader Out Of School After Discovering She’s Being Taught “White People Are Bad, Mean & Racist”