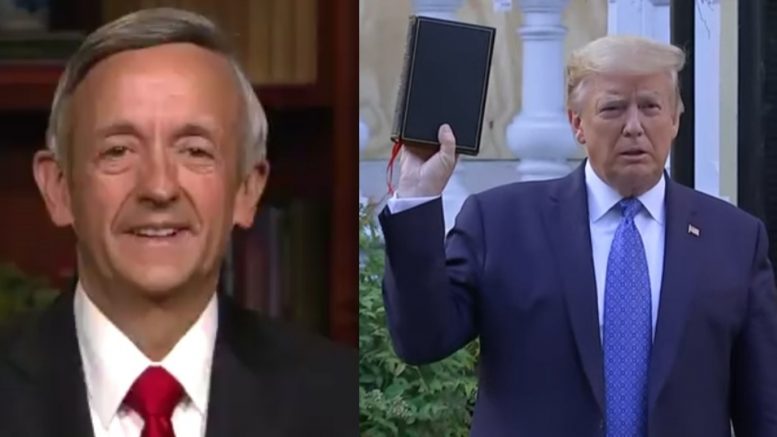 Just one day after the damage was inflicted on the St. John’s, Trump surprised the media as he and his entourage walked over to the historic church soon after delivering a Rose Garden speech.

After arriving at the church, President Trump held up a Bible into the air and said, “We have the greatest country in the world, we’ll keep it nice and safe.”

In reaction to President Trump’s dramatic visit to St. John’s church, Pastor Jeffress reminded Americans that they should “thank God” for having a President like Donald Trump and encouraged daily prayers for the Commander-In-Chief.

“We saw a group of these ‘peaceful protestors’ in Washington, D.C. nearly burn down the most historic church in America, the St. John’s church — the church of presidents, the church where I preached the inauguration sermon for President Trump,” Jeffress told Fox News host Lou Dobbs.

He continued, “And thank God we’ve got a President like Donald Trump, who 24 hours later marched over, stood in front of that church, held up a Bible and showed his solidarity, not only with that congregation, but with houses of worship all over America saying, ‘We’re not gonna put up with this kind of you know what in America any longer.'”

And I really believe, Lou, every American needs to thank God daily for a President like Donald Trump,” Jeffress advised. “We need to pray for this President daily, and we need to support him as he fulfills his God-given and constitutional responsibility to keep America safe.” Video Below