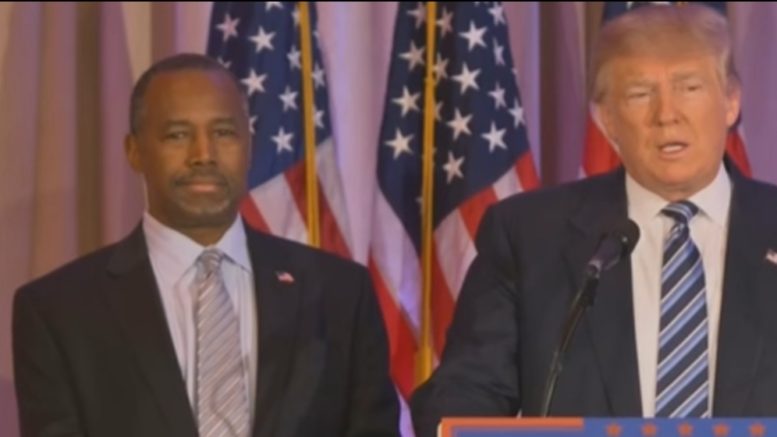 HUD Secretary Dr. Ben Carson issued positive remarks in support of President Trump and called on people of faith to pray for the Trump instead of “casting stones” at him.

Carson’s statement came just days after the publication Christianity Today published an editorial that called on the removal of President Trump after the Democrat-controlled House passed two articles of impeachment.

Related Article: Dr. Ben Carson Responds To ‘Scathing’ Remarks Directed At Him By Maxine Waters: “We Want People To Rise”

President Trump slammed Christianity Today as their editor-in-chief Mark Galli wrote, “The president of the United States attempted to use his political power to coerce a foreign leader to harass and discredit one of the president’s political opponents. That is not only a violation of the Constitution; more importantly, it is profoundly immoral.”

“To the many evangelicals who continue to support Mr. Trump in spite of his blackened moral record, we might say this: Remember who you are and whom you serve. Consider how your justification of Mr. Trump influences your witness to your Lord and Savior,” Galli continied. “Consider what an unbelieving world will say if you continue to brush off Mr. Trump’s immoral words and behavior in the cause of political expediency.”

Without specifically calling out Christianity Today, Dr. Carson gave his personal account of President Trump’s character and relationship with God based on what he has seen while working with him over the last three years. And it strikingly contrasted that of what Christianity Today’s editor-in-chief said to his readers. See Below

“I know @realDonaldTrump. He is a good, caring man, and someone that puts our country’s trust in God. He understands the rights of every American come from our Creator,” Dr. Carson said in a thread of tweets.

“I believe God’s providence was very much part of him becoming our Commander-in-Chief, and he understands the importance of making sure our Judeo-Christian values remain the core component of our country’s foundation,” he added.

“Men and women of faith should be praying for our President @realDonaldTrump , not casting stones,” Dr. Carson advised. See Below

I know @realDonaldTrump. He is a good, caring man, and someone that puts our country's trust in God. He understands the rights of every American come from our Creator.

Men and women of faith should be praying for our President @realDonaldTrump , not casting stones.

In ending, here is video of Pastor Jeffress’s response to Christianity Today’s hit-piece on President Trump.